Poetry in the Time of Melancholia: Rae Armantrout’s “Conjure”

Some years ago, I entered a bookshop in Montmartre to browse the used titles. I struck up a conversation with the proprietor, an older gentleman who seemed very learned. We traded broken English and French for awhile before he directed me to the side of the room. He handed me a book with such gravity you might have thought he was selling Soviet nuclear secrets.

“This man,” he said, tapping the cover of the book as he handed it to me, “this man is most important poet. Ever.” I regarded the cover, it was a volume of poetry by George Oppen, whose work I also happened to admire.

We nodded at each other in agreement. He seemed relieved as if he’d just released a burden that he’d carried for years. Or maybe he just wanted to sell a book. In any case, I bought the book in appreciation of his tip. I have been a dedicated fan ever since.

Now it is my turn to beckon you. Come over here. I am handing you a copy of Rae Armantrout’s new collection, Conjure.

I could tell you about her resume, that she’s won a Pulitzer and the National Book Critics Award and written numerous volumes of poetry and best of all, proclaimed the favorite living poet of Nick Cave.

I might add that she is often grouped with the “Language Poets” a movement founded in the 60s which included Charles Bernstein, Lyn Hejinian, Clark Coolidge, and others. Language Poetry put the reader in the driver’s seat, lends itself to be interpreted by the reader as opposed to having any one set definition or meaning. It reminds me of a fortune one might receive from the I Ching, advice so open ended you could apply it to whatever bliss or wreckage you might be experiencing. I consulted the book of ancient wisdom to ask how best to approach the poetry of Rae Armentrout.

I threw the coins six times.

I end with Hexagram number 11, the symbol for T’ai and Peace.

The analysis ran thus; It doesn’t get any better than this. Everything is in harmony, all obstacles are cleared from your path, anything you could ask for is right at hand.

This is probably the best review any writer could hope for. It certainly describes how I have felt reading Armantrout’s poetry over the years. There is the anticipation that is felt when rumors of a new volume reach my outpost. I disappear for awhile with her words. I can’t be reached. When I tell friends what I’m reading, the response is often I don’t get poetry. You’re dead to me, I tell them. Those people need to read “Where Will You Spend Eternity.” Here is how it begins:

How would you describe a God
who could use magic
but doesn’t,

who prefers elaborate
widgets and toggles,

seconds toppling
one by one,

the careful recording
of endless instructions?

Armantrout’s voice is engaging and reminds me of the thoughtful provocation of Emily Dickinson, a feeling of a consistent, indicative mood, in the presence of an understanding that assumes you share an awareness of the chaotic nature of life. What on first reading might be thought to be a whimsical observation, reveals layers of meaning the more one thinks about it. “Who could use magic but doesn’t:” I turned this phrase over in my head for a few days. Is there already enough magic in the world? Are we blind to the magic that does exist in our day to day lives? Or is God simply taunting us?

While Armantrout’s Money Shot (2011) was born out of the 2008–9 recession, Conjure takes note of our current crises with a discerning eye. In her poem “Notice,” she writes: “Turns out / the mummy’s curse / is real.” It does seem as though we are living in times cursed by mummies, but it is in such time that art flourishes and gives us nourishment. Sylvia Plath left us a clue on her tombstone: “Even amidst fierce flame, the Golden Lotus can be planted.” It is in this spirit that Armantrout lays out her lines and observes. From her poem “Motive:”

Cameras are mounted
on walls. In trees?

We want to believe
the cursory glances
of our young neighbors
have missed us
entirely.

Instead of succumbing to the dread of government and private surveillance, she attempts to rise above it. From “Intervals:”

This buzz, this tickle
could be contentment

Olivia Lang asks the age-old question in her essay, “You Look At The Sun,” “Can art do anything, especially during periods of crisis?”and provides an answer: “What art does is provide material with which to think: new registers, new spaces. After that, friend, it’s up to you.” A poet like Armantrout opens up those spaces—and continues to, long after you’ve stopped reading.

Poems are like bombs. You might be at the grocery or in a dentist’s chair maybe and suddenly a line will revisit you and you’ll say, now I get it! Then maybe, when I tell you I’m reading the new book of poems by Rae Armantrout, you will say to me, hey, I love poetry! I’m going to buy it today! (though I won’t hold my breath). In any case, don’t take my word for it, listen to the I Ching’s final judgment of her poetry;

Recognize it as your greatest opportunity to build your resources against less harmonious times.

David Breithaupt has written for The Nervous Breakdown, Rumpus, Exquisite Corpse, and others. He has worked as a bibliographic assistant to Allen Ginsberg, a newsstand checker for Rolling Stone, and a staff member to the great Brazenhead Bookstore in New York City. He currently works for two sports newspapers in Columbus, Ohio, covering the Cincinnati Reds and OSU collegiate sports. 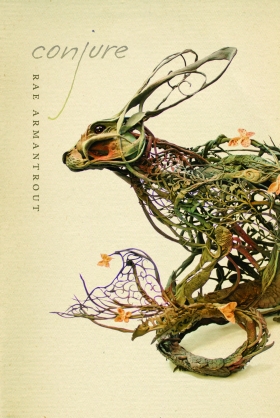 Poetry in the Time of Melancholia: Rae Armantrout’s “Conjure”