Linking Old-Age Justice and Racial Justice, Then and Now

The pandemic has revealed the vulnerabilities of older Americans, and not exclusively those living in veterans’ or nursing homes or assisted living. “Older” doesn’t mean at the end of life. Over 60 percent of Americans of all ages suffer some chronic condition: obesity, high-blood pressure and hypertension, heart disease. In fact, not one but two groups have died disproportionally from COVID-19: people over 65 and people of color who incur illnesses earlier in the life course, in general, than white people, due to the systematic impact of racism. News stories segregate these grim statistics by race or by age, but they intersect wherever people are excluded from care, investment, and respect. Theirs are the premature deaths of this pandemic.

Early death, for these hundreds of thousands, should be understood as the result of systemic disregard, indifference, even active hostility. If Medicare for All had been instituted 60 years ago, fewer would have these pre-existing conditions. If Congress had raised the federal minimum wage to a living wage, fewer would have been worn down by years of evictions, food insecurity, and scrambles for stressful work.

A decade ago, prison abolitionist Ruth Gilmore warned us that this murderous system called “racism” is nothing less than the “production and exploitation of group-differentiated vulnerabilty to premature death.” During the pandemic, medical resources flowed towards white communities, resulting in what Keeanga-Yamahtta Taylor has memorably termed “the Black Plague.” Current data show that 69 percent of Native Americans and 61 percent of Black Americans over age 65 have a pre-existing condition that puts them at higher risk, compared with 54 percent of white adults over age 65.

Like racism, ageism can be murderous. The two combined are devastating. Ageism adds to earlier accumulated disadvantages and strikes at all classes. If government officials, federal and state, had better monitored care homes, more residents would be surviving COVID-19. When the respiratory infection began to kill older people in unprecedented numbers, the panic over scarce ventilators plainly showed that doctors and bio-ethicists (and the governors and hospital administrators who accepted their triage guidelines) considered younger people more worth saving.

At this hideous juncture (“crisis cubed,” Jelani Cobb calls it), police violence intersects with glaring health disparities and failures of care for older people. Those protesting the deaths of younger people at the hands of the police also care about older Americans’ lives, but there has yet to emerge a clear language for talking about the two pandemics of COVID-19 and anti-Black violence at the same time. A key question emerges. How do we imagine a world in which lives matter from the day of birth to their natural end? How do we bring about this better world?

Black abolitionist women offered powerful answers to these questions in the years after the Civil War. Sojourner Truth, Harriet Tubman, and others whom we remember for their fight against slavery also developed startling but little remembered claims for old-age justice.

In 1870, Truth petitioned Congress to set aside a “portion of the public land in the West” for the resettlement of ex-slaves and “erect buildings thereon for the aged and infirm.” Arguing that enslaved people “have been a source of wealth to this republic” and that “some of its dividends must surely be ours,” she insisted that they were not burdens on the national treasury, but creditors owed a debt. Support for the elderly would be reparations for slavery.

Other Black feminist abolitionists, most notably Tubman and Frances Harper, devoted themselves to establishing homes for old Black people. Harper decried the political economy of the United States, which enabled the “strong and powerful” to treat the “weakest and feeblest” as though they were “vermin to be crushed out, or beasts of burden to be bridled and bitted.”

Truth, Tubman, and Harper lived extraordinarily long lives. As they grew old in public, they modeled strategies for what Stephanie Evans aptly terms “historical wellness.” In her study of centenarians’ memoirs, Evans explains how old Black women managed stress, forging spiritual and physical strategies that they passed down. Like Native Americans and immigrant women, they created a rich legacy of survival into old age.

Historians and age critics help us analyze how prejudice functions in particular historical contexts and what purposes ideas about age serve — even when the ideas are not true.

Toxic untruths have gone viral in the wake of the panic and the data about deaths in care homes. “Only old people die.” Older people are seen as frail and sick — doomed to die anyway. People over seventy, the Lieutenant Governor of Texas, Dan Patrick, suggested, should be willing to “sacrifice” themselves for capitalism. “The old” could be segregated (for their own protection, of course). This strategy for opening the economy ignores the awful risks to low-income people of all colors who are not old enough for Social Security or don’t receive it, who are forced out to work by fear of hunger and homelessness. It ignores the fact that many people over 65 cannot be isolated: they live in families that need their assistance and work because they must.

Long before the Gray Panthers, the Raging Grannies, or the Diverse Elders Coalition recognized the hostile damages of ageism, abolitionist feminists unleashed righteous anger at the stigmas attached to those who were no longer young. They argued that until old women of color are free, nobody will be free.

Today, in 2020, we know in our bones that until all the vulnerable are treated equally by the powerful, in sickness and in scarcity, in the frightening hospitals or on the frightening streets of our cities, there is no equality. We need both the urgent bill in the House to reform policing, and legislation to reform the negligent home-care industries and the government agencies tasked with keeping our elders safe and respected. Can Americans learn to attack ageism on all fronts, as a multi-racial and multi-generational movement is finally attacking racism?

Corinne T. Field, associate professor of Women’s, Gender, and Sexuality Studies at the University of Virginia, is the author of The Struggle for Equal Adulthood: Gender, Race, Age, and the Fight for Citizenship in Antebellum America.

Margaret Morganroth Gullette, a Resident Scholar at the WSRC at Brandeis, is the author most recently of Ending Ageism, or How Not to Shoot Old People. 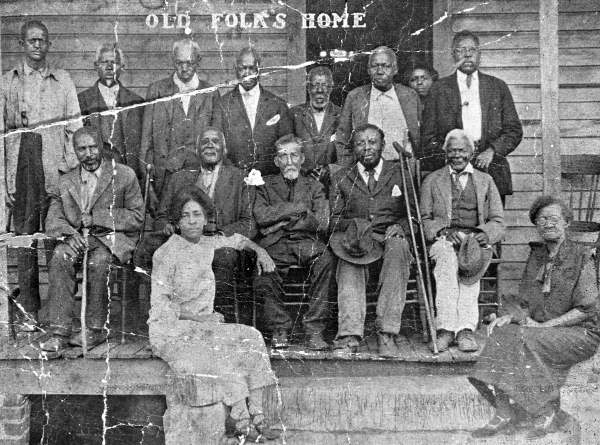 Linking Old-Age Justice and Racial Justice, Then and Now