Hiding from Pandemics, and from Ourselves: The Case of Ben Jonson

My UCLA seminar on “Poetry and Society in England, from the Spanish Armada to the Glorious Revolution” began, via Zoom, a few weeks ago. Last year I planned the syllabus with an opening session about death, focusing on what epitaphs and funerals reveal about cultural values, especially during that century’s many outbreaks of plague.

A month ago I rearranged that syllabus, after imagining how my undergraduate self would have felt if this pandemic had occurred when I was in college and this was my first class meeting in the midst of it. But it’s worth recalling the great little poem from over 400 years ago that my course would have started with.

Ben Jonson’s “On My First Son” is about succumbing to an epidemic, and also (less directly but more tellingly) about hiding away from one:

Farewell, thou child of my right hand, and joy;
My sin was too much hope of thee, lov’d boy.
Seven years thou wert lent to me, and I thee pay,
Exacted by thy fate, on the just day.
O, could I lose all father now! For why
Will man lament the state he should envy?
To have so soon ’scap’d world’s and flesh’s rage,
And, if no other misery, yet age?
Rest in soft peace, and, ask’d, say here doth lie
Ben Jonson his best piece of poetry.
For whose sake, henceforth, all his vows be such,
As what he loves may never like too much.

Jonson clings to his son by playing on their shared name, from “child of my right hand” (the meaning of the name “Benjamin”) in the first line, and again in the ambiguity of “Ben Jonson his” in the tenth (Elizabethan grammarians wrongly assumed that the possessive apostrophe-s suffix was a contraction of “his”).

Like many epitaphs, this one treats writing as a magic spell against mortality, in “child of my right hand” (his writing as well as his son) and again in “best piece of poetry” (poesis was the Greek word for “making,” not limited to verbal creation).

Jonson draws on the Roman poet Martial’s epigrams, from about 1,500 years earlier, trying to deploy classical Stoicism against the anguish surrounding bereavement even in a Christian society.

What especially interests me now, however, is what a crafty piece of passive-aggression Jonson deploys against God. Jonson must have known that readers (even those with a Puritan’s sensitive idolatry-detector) weren’t likely to agree that having hope for your child is such a sin that it should be punished with the child’s death. And surely simply liking (being pleased by) a child you love wouldn’t justify that fate.

He must have known, also, that saying his son was “lent me, and I thee pay / Exacted by thy fate on the just day” makes the bereavement sound more like the work of a merciless loan shark than a loving deity. Jonson could instead have written something like, “given me, and now returned / To the embrace of God on a glorious Judgment Day.”

Consider, however, that Jonson had actually fled the bubonic plague that was beginning to ravage London (where it killed more than half the residents of some especially crowded parishes that year). He probably used his literary celebrity to wangle an invitation to the country house of the antiquarian Sir Robert Cotton — an invitation that evidently didn’t include his family. It was also a good career move, since Cotton was close to the newly crowned King James I, who would soon provide the struggling Jonson with patronage.

A characteristically drunken Jonson later revealed that, while at Cotton’s, “he saw in a vision his eldest son, then a child and at London, appear unto him with the mark of a bloody cross on his forehead, as if it had been cutted with a sword.” He told his old mentor about it the next morning, and was assured it was meaningless. But that very morning a letter from Jonson’s wife arrived, reporting their son’s death.

Now consider the fact that, when plague was discovered in a house in London, the authorities would lock the residents in and nail or paint a red cross on the door.

Jonson had envisioned his son in “a manly shape, and of that growth that he thinks he shall be at the Resurrection.” Might Jonson have been uneasy about how such a powerful figure might confront and condemn him?

Kind of amazing, being able to travel back in time like this, not only into Jonson’s life, but into the dream-work of his subconscious mind.

Once we know this bit of Jonson’s personal history, his wish that he could “lose all father” — cut loose any natural paternal feelings — and thus accept the boy’s death stoically or as a mercy, may strike us not as an effort to hold God blameless, but instead as a guilt-driven desire to pass off the role of neglectful parent to God the Father. And the backstory certainly discredits Jonson’s effort in the middle quatrain of the poem to see his son’s death as a blessing for the boy but an injustice toward the boy’s devoted father.

“On My First Son” is now an opportunity to think past the reflexes of denial and blame that I’m suggesting shaped Jonson’s writing of it. The poem and the story behind it oblige us to think about all the people who are being left behind, vulnerable to this pandemic and countless other dangers, maybe hovering on the edges of our conscience and pleading with us in our bad dreams.

Unlike a plague bacterium or coronavirus, a poem can survive on a piece of paper for centuries and still get under our skin — not as an enemy, but as an inoculation against our carelessness and self-involvement.

A poem, especially an epitaph, can show us consolingly that our sorrows are not ours alone. Read more deeply, it can also make us notice sorrows that are not ours, but could be ours to forestall.

Robert N. Watson is Distinguished Professor of English at UCLA, where he served as chair of the Faculty of Letters and Science and Vice-Provost for Educational Innovation. His poetry has appeared in The New Yorker and elsewhere. 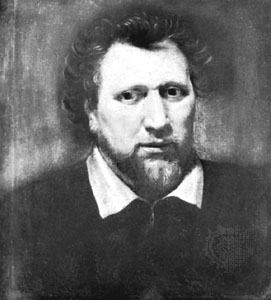 Hiding from Pandemics, and from Ourselves: The Case of Ben Jonson