THE WORLD’S first hat revolution took place in Turkey in 1925. On November 25 of that year, the parliament passed a law that made it mandatory for all men to wear Western-style hats in public places; all civil servants had to wear them, and no other type of hat would be allowed. Those who went hatless would be left alone, but if one wanted to wear a hat then one had to either wear the proposed model (and not the traditional turban or fez) or face the consequences, which could be as severe as the death penalty.

Before the “Hat Law” was passed in parliament, the Turkish revolutionary Mustafa Kemal had visited the Anatolian town of Inebolu where he gave an impassioned speech (later dubbed “The Hat Sermon”) to a group of bemused Anatolians. “Masters,” he said (Kemal always addressed his audience as “masters” and once said the peasants were “the true masters of the country”):

Kemal asked his audience two important questions: “Is our dress nationalistic? Is our dress civilized and universal?” Both were received with enthusiastic cries of “No! No! It’s not!” He then inquired whether it was conceivable for a nation to be lacking a proper national dress. “Does it make sense to daub a very precious jewel with mud?” he asked rhetorically. “If there is a jewel inside the mud then we need to wipe away the mud in order to reveal the jewel; this is only natural and necessary.” Kemal’s request for wiping away the mud was followed by specifications of his sartorial vision for his countrymen. “We shall wear Oxford shoes or alternately, ankle shoes from now on; and trousers, waistcoats, shirts, ties, removable collars, jackets and most naturally, hats.” In an attempt to better explain the cultural significance of the hat, he added, “This is something like a redingote, a bonjour, a smoking coat, a frock. Here it is.” Placing the hat on his head, Kemal concluded, “Some people say it is not lawful to wear it. And I say to them you are absentminded and ignorant!”

Not everyone shared Kemal’s enthusiasm for wearing top hats, Oxford shoes, and removable collars. Indeed, the hat quickly turned into a symbol of the clash between his reformist supporters and their conservative opponents. The day before the Hat Law was passed in parliament, a group of protesters in the eastern city of Erzurum flocked to the governorship building and threw stones at the lodgings of the state-assigned governor. Three people died when soldiers fired at the crowds to protect the building. Soon afterward martial law was declared and the army corps were deployed to the city. The opponents of the hat revolution were detained. At least 13 people were executed, including a woman.

Reaction to the new hats snowballed in different cities. The last days of November saw protests spread to cities like Rize, Sivas, Maraş, and Kayseri, where the Independence Tribunals, which had been armed with extraordinary powers against army deserters and suspected enemies of the revolution, executed 20 people. (Anatolian people never seem to have been big fans of wars or military life. According to the historian Erik-Jan Zürcher, by the end of the first World War the number of deserters in the Turkish army had “increased to nearly half a million, a number far higher than that of the soldiers remaining in the field” — this is among the highest percentages of military desertion during a major war.)

One of the most interesting figures opposing the “Hat Law” was İskilipli Mehmed Âtıf Hodja, an Islamic scholar who made a name for himself in Istanbul’s Darü’l-fünun Divinity School. In an influential pamphlet, “The Imitation of the West and the Hat,” he argued that it was absurd for Muslims to try to dress like Westerners. Mehmed Âtıf’s pamphlet was seen as particularly toxic by state officials who gave orders to detain the scholar immediately. In December 1925 he was arrested and sent to an Independence Tribunal. During his inquisition, Mehmed Âtıf was pressured to repent for his views and at the end of his two-day long trial he was sentenced to death by hanging.

According to his critics, Mehmed Âtıf’s real crime was not so much his dislike for the new hats but opposing the new heads of state. Like Ali Kemal (about whom I wrote earlier here), Mehmed Âtıf was accused of being a member of the Association of the Friends of England in Turkey and in the pay of the British government. This is quite ironic, given that the British opposed Turkey’s adoption of Oxford shoes and top hats.

The severity of the punishments against those who didn’t wear hats must have scared citizens, who started queuing outside shops from the wee hours of the day. A few years later in 1934, the Turkish entrepreneur Vitali Hakko decided to capitalize on the revolution and opened a shop called Şen Şapka (The Merry Hat) in Istanbul. Hakko manufactured hats and scarves. The massive demand for the former made him one of the richest men in the country. Eighty years after its foundation, his venture (now Vakko) is widely acknowledged to be one of the leading fashion houses in the country. Despite the high quality of the hats he produced, not everyone shopped from Hakko’s Merry Hat, mostly due to economic reasons. Those who couldn’t afford them flocked to numerous shops where, due to lack of supplies, men would sometimes be given women’s hats, which they put on in fear of authorities.

The Hat Law of 1925 is still in place. It is part of the Turkish Penal Code, which continues to include the infamous Article 301, an earlier version of which had led to the assassination of the Turkish-Armenian journalist Hrant Dink, who was accused of “insulting Turkishness” because of his journalism. Turkish legislators have a strange habit of not doing anything to repeal laws, even when they obviously make life worse for some of the country’s citizens. Indeed, “not wearing a proper hat” is a criminal offense to this day, punishable with two to six months in prison. When Kenan Evren, the leader of the 1980 coup, decided to draft a new constitution for his people, he made sure to preserve the Hat Law. Evren, whose crimes during his military rule are currently the subject of a court case, happened to be a big fan of fedora hats. But it is not only dictators like him who can’t do without the law. Otherwise it wouldn’t have remained the law for more than eight decades. I have read numerous articles in the press recently about the controversy caused by the current government’s plans to repeal the Hat Law. Although it is inactive, the law is still in place, like a forgotten bug lying dead in some dark corner of your apartment.

When representatives of the European Commission visited Ankara in 2004 they were surprised to hear about the law’s existence. They said such a law would certainly be against European standards; if a Turkish citizen filed a complaint about the “Hat Law” in the European Court of Human Rights, she would most certainly win the case. Their outrage was not shared by Turkish parliamentarians, who said the law had never been used during the past 80 years.

Historical records contest that defense. Two months ago a Turkish columnist quoted passages from old newspaper articles that report incidents concerning the use of the Hat Law. In November 1962, on Istanbul’s Kabataş pier, an elderly man was taken into custody for wearing a skullcap. During his interrogation the man said he didn’t “know how to wear a Westernized hat.” In another case, a citizen tried entering a nightclub wearing a fez. He was reported to the authorities and swiftly captured by the police. He said he was from Syria and not subject to Turkish laws but the officers did not accept his explanation. He then said he wore the fez after a friend bet he couldn’t do it. Again his explanation was refused.

A parliamentarian from BDP, the left-wing Peace and Democracy Party, filed a proposal to remove the “Hat Law” in April this year. “Nobody complies with the law nor do the judges take it seriously anyway,” he argued. “The prosecutors should either sue everyone who doesn’t comply with the Hat Law or the law should be removed.”

Don’t get me wrong. I am a big fan of fedoras myself. After watching Indiana Jones as a child I fell in love with them; I have always imagined the fedora to be an irreplaceable part of an academic’s wardrobe, something aesthetically appealing and associated with a life of adventure. I still keep the hat an old girlfriend bought for me as a present more than a decade ago; I can also understand the revolutionaries’ need to use force to make people accept what must at the time have appeared to them to be an unpalatable reform: being forced to wear a hat must have felt weird, but then the Ottomans had been forced to wear a fez, so not much had changed. And yet whenever I put on a fedora, I can’t help but think about people who were executed for not wanting to wear hats and the image fills me with a strange sense of grief. 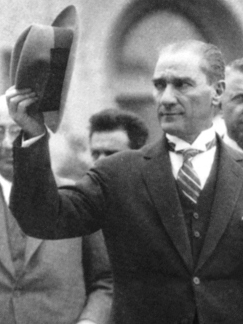