MARK DERY’S WORK IS BAT-SHIT CRAZY — in the best possible way. Though a brief scan of his output might lead one to mistake the cultural critic for a mere artifact of the cyberculture-chattering class — those techno-savvy theorists in the late twentieth century who rallied around things like Donna Haraway’s essay “A Cyborg Manifesto,” the “cyberdelic” magazine Mondo 2000, and Jean Baudrillard’s theories of hyperreality — Dery, to be sure, was one of the brightest and original extrapolators of subcultures sprouting up in the salad days of cyberpunks and Netscape. In 1990, he penned for The New York Times a sprawling feature on “culture jamming” — the concept of messing with consumer culture with dissident messages for the sake of exposing, as he put it, how corporations “use the media as a tool of behavior modification.” (Think spray painting “Profits” on a Coca-Cola billboard under its “Enjoy” tagline, or, if one’s inclined, what the goggles reveal in the John Carpenter film, They Live).

Dery’s 1993 monograph Culture Jamming: Hacking, Slashing, and Sniping in the Empire of Signs was followed by Flame Wars: The Discourse of Cyberculture — a benchmark anthology by and for “information wants to be free” intellectuals — which came packaged with fascinating-yet-esoteric essays with florid titles like “New Age Mutant Hacker” and “Compu-Sex: Erotica for Cybernauts.” And his late-1990s follow-ups, Escape Velocity: Cyberculture at the End of the Century (1997), along with his first essay collection The Pyrotechnic Insanitarium: American Culture on the Brink (1999), were voyeuristic chronicles of phenomena like “cyber-hippies” turning on with smart drugs and mind machines, cybersex phasing out physical intimacy, and the looming of the technological singularity. But as thought provoking as these books were, Dery often favored jargon over narrative, leaving bits of the works nearly airless. As a taste, in Escape Velocity, a little-known Japanese cult film is described as a “maelstrom of body loathing, cyborg fantasies, mechano-eroticism, information anxiety, agoraphobia, castration complexes and fear of phallic mothers.”

Thankfully, Dery didn’t stay marooned in cyberspace. Over the past decade or so, he’s toned down the critical-techno talk while still focusing on America’s bizarre and extreme outposts. The end result is Dery’s most recent effort, I Must Not Think Bad Thoughts: Drive-By Essays on American Dread, American Dreams, and it contains some of the finest work of his career. In the book’s introduction, science fiction writer Bruce Sterling calls the collection “more personal and also more universal than his earlier work,” and adds that the essays almost read “like moral philosophy.” But this is not to say that Dery is now America’s answer to Alain de Botton. Rather, he approaches cultural ethics as his heroes J.G. Ballard and David Lynch do: through inquiries into the “weird extremes of human behavior.”

The book contains more than thirty of his essays, culled from places like The Village Voice, Bookforum, and the Los Angeles Times, as well as small critical journals such as 21C Magazine and Cabinet Magazine, and online platforms like Boing Boing, Nerve, and the defunct True/Slant. Dery shellacks, among other topics, gun culture and Nazism; offers up ruminations on whether the suicide note should be its own literary genre and whether HAL, the supercomputer from 2001: A Space Odyssey, is gay; and launches mini-investigations into the homoerotic undercurrents of the Super Bowl and George W. Bush’s bravado. There is a piece linking Santa to Satanism, and one on the subversive fantasies of Star Trek fans, as well as musings on the Church of Euthanasia and writer Gordon Grice’s “natural-history gothic” book, Deadly Kingdom. And there are a handful of personal essays, including one on the barbaric nature of dentistry; and a Mythologies-like unpacking of the image of pop-star Madonna displaying her big toe.

This omnium-gatherum is packaged in the book’s introduction, tied together by the trope of “thinking bad thoughts,” the collection’s aesthetic and moral creed. Boston-born but Southern-California-raised, Dery recalls that he first came to the conviction while attending college in Los Angeles and listening to “I Must Not Think Bad Thoughts,” the 1983 song by L.A. punk band X. As Dery tells it, the track’s sociopolitical angst, compounded by his professor’s diffidence towards books like Naked Lunch, prompted him to decide that’s “it’s a writer’s job, as well, to Think Bad Thoughts.”

In contemporary America, which Dery names as the “abiding subject” of the book, he says this bad-thoughts mindset is a “rejection of bred-in-the-bone Puritanism; bourgeois anxieties about taste; the self-censorship routinely practiced by academics, fearful of offending tenure committees and blinkered by elite assumption about what constitutes ‘serious’ subject matter and ‘scholarly’ style; the craven capitulation of Hollywood and the news media, phobic of truly controversial content that might scare off advertisers or upset Middle America’s mental digestion.” Portentous assertions, certainly, but Dery is refreshingly serious about being guided by the credo.

Dery is a flâneur of the American Gothic, of what he calls “the stomach-plunging drop from reassuring myth to ugly truth — the distance between our dream of ourselves and the face staring back at us from the cultural mirror.” One such looking glass, says Dery in the essay “Dead Man Walking,” is the zombie, which he cannily describes as “a polyvalent revenant, a bloating signifier.” He reads the recent economic meltdown as an allegoric gothic novel, where zombies are the “dead-eyed, bone-gnawing underclass,” and another undead archetype, vampires, are the “bloodsucking Wall Street elite.” He traces such correlations back to Karl Marx, whom he calls the “unparalleled master of the political gothic.” For Dery, there’s a yarn that goes from Marx once calling capital’s sustenance “the living blood of labor” to Rolling Stone’s Matt Taibbi condemning Goldman Sachs as “a great vampire squid wrapped around the face of humanity, relentlessly jamming its blood funnel into anything that smells like money.”

Elsewhere, Dery grapples with the cultural tug-of-war between the cuddly image of Mark Twain as “a cigar-puffing wisecracker — George Burns doing a Colonel Sanders impression,” and what he sees as Samuel Clemens’s true nature: America’s sui generis iconoclast and the antecedent of “the William S. Burroughs of ‘Roosevelt after Inauguration’ and the Hunter Thompson of ‘The Kentucky Derby is Decadent and Depraved.’” As he has it, “Americans prefer their history Disneyfied and harbor a constitutional aversion to brow-furrowing, especially about deep, dark things.”

The antithesis of Twain in the book (and for that matter, David Bowie, who Dery champions in another piece), is Lady Gaga. “Color me rockist,” writes Dery in a jeremiad against the singer, “but there is something profoundly, throbbingly dumb about Gaga’s Fame-Monster Mash of electroclash, bubblegum disco in the Madonna mode, and hair-metal power ballads — an exuberant stupidity that wants to vogue its way into our hearts but makes our minds throw up a little.”

Crucially, for readers who don’t agree with the assessment, there’s still much to be admired here, particularly Dery’s stupendous knack for aphoristic wittiness (“Gaga is the poet laureate of the supremely banal”) and the darkly comic denunciation (“Gaga isn’t terribly transgressive. At heart, she’s a life coach in megaplatforms, all moral uplift and daily affirmations”). Dery is a first-rate critic, one who makes the quotidian matter, or rather, as H.L. Mencken once said, makes it “charming, and that is always a million times more important than making it true.”

And while Dery is no longer working the cyberspace beat, I Must Not Think Bad Thoughts still contains a few assessments on digital culture — though now with a more cantankerous bent on the contemporary rather than the speculative. In his essay “World Wide Wonder Closet,” he runs personal blogs through the ringer, likening them to the “intellectual equivalent of Beaumont’s experiments in gastric physiology, observing digestion through a hole in the stomach of a wounded warrior.”

Dery defangs Facebook in another essay, and it’s one of the best in the book. The social networking service, he says, is a utility of regression, returning users to the “adolescent psychology of high school.” In his case, Facebook makes vivid the indelible memories of being a teenager in 1970s Southern California. Dery has a zeal for taxonomy, and here he invents the term “stoner noir” to describe his own experiences. He writes:

The sludge-brained anomie of stoner noir is just what it looks like: the rudderless yawing of youth culture on the morning after the ’60s. It’s the numb realization that the tide that carried in the counterculture’s utopian dreams and cries for social justice has ebbed away, leaving the windblown scum of Altamont and My Lai, the Manson murders and the Zodiac Killer. Stoner noir stares back at you with the awful emptiness of the black-hole eyes in a Smiley Face. Have a Nice Decade.

In his essay on Twain, called “Mysterious Stranger,” Dery quotes a passage about Huckleberry Finn from Love and Death in the American Novel, written by the late critic Leslie Fiedler:

This thoroughly horrifying book, whose morality is rejection and whose ambiance is terror, is a funny book, at last somehow a children’s book after all … . This ambiguity, this deep doubleness of Huckleberry Finn is its essential riddle. How can it be at once so terrible and so comfortable to read?

Dery retorts: “My answer to the question Fiedler posed in 1966 is simply that Huckleberry Finn’s deep doubleness is our doubleness as a nation, and thus feels familiar, terrible though it may be.” That response, as it happens, can also be said about the recognizable shock and awe of I Must Not Think Bad Thoughts. Dery’s dark you-can’t-think-this-stuff-up carnival tour of present-day America is far more thought-provoking than anything virtual reality can offer.

I Must Not Think Bad Thoughts 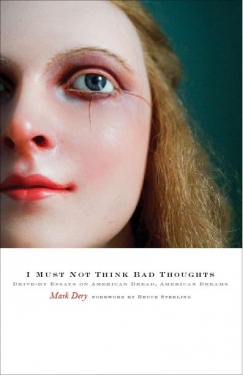