A 2008 REPORT BY the Washington-based Council on Library and Information Resources predicted that “the library of the 21st century will be more of an abstraction than a traditional presence.” While the recent proliferation of iPads, Kindles and other E-reader devices would seem to bear this out, the transition from print to digital is likely to entail much more than a mere change of medium — it has the potential to profoundly alter the very process of knowledge production. Just as the advent of the word processor made the practice of composing text more open-ended and spontaneous, the new digital technologies may extend to the whole of the publishing process their logic of fluid and multivalent editorship.

This era of historically unprecedented production and dissemination of ideas has arguably made informed and authoritative editorship more important than ever; paradoxically, the Internet’s technologies are geared, in Kathleen Fitzpatrick’s words, “to promote the open exchange of data in a content-agnostic fashion.” Fitzpatrick’s Planned Obsolescence — its title a sardonic speculation on the future of the printed book — considers how academic publishing might best resolve this challenging dilemma. As co-founder of the digital scholarly network MediaCommmons, Fitzpatrick — who lectures in Media Studies at Pomona College in California — is well placed to observe the development of digital culture in academia.

The MediaCommons blog is a scholarly community grappling to harness the potential of the new technologies. Scholars from across the United States relate and reflect upon their experiences with digital publishing and create a series of web-based experimental initiatives. One such program is In Media Res, where media studies scholars curate a daily slideshow, with each image accompanied by 350 words of text, with fellow participants posting feedback; the aim is allow scholars to share their ideas and engage one another in a constant and dynamic dialogue. That the MediaCommons project also feels remarkably directionless — in the sense that it lacks an identifiable linear goal — is no accident. Reader participation and engagement, albeit of a highly involved and integrated kind, would appear to be the end in itself. This, in a nutshell, is how far we have come with the new technologies thus far.

Notions of authorship have always been in flux. During the French revolution, Nicolas de Condorcet found the notion of “absolute authorship” both politically and philosophically untenable. His experiment in doing away with exclusive rights culminated in a chaos of sedition, libel, and piracy before the legislators of the First Republic reinstated legal authorship. Fitzpatrick reminds us that received ideas of authorship “derive less from the technologies and process that produce the author’s text” than they do “from the legislative and economic systems that govern those technologies and processes.” It is a sobering antidote to the vulgar technological determinism that characterizes so much of the hype around the digital revolution. Digital technologies represent a potential threat to our own notions of authorship, individualism, and private property as the dominant mode of text delivery shifts from the “read-only” structure of print to a digital “read-write” structure, in which a new generation increasingly “expects that the reader will likewise be allowed to write.” Authorship becomes increasingly unassignable as work comes more and more to resemble the dialogue streams of MediaCommons experiments.

This revolution brings particularly far-reaching consequences for academic publishing; authorial primacy — the thing that makes your ideas original, cogent and valuable — is after all the very currency of scholarship. Fitzpatrick argues that digital technology can illuminate the murky system of academic peer review (the process by which a monograph, a thesis or a book is circulated among academics who judge whether the work is worthy of publication) by using open, interactive online systems to create a transparent dialogue between writer and readers. The scholars who participate in this process effectively form a sort of proxy editorial panel for the various academic publishing houses and provide an essential safeguard of quality control. Fitzpatrick’s alternative is devastatingly simple: you reverse the order — publish now, scrutinize and discuss later. While such an approach would have been logistically unfeasible under the regime of paper and print, the technological tools are now available to effect such a transformation. Effectively, publication per se would become a given; peer review — and the validation it may or may not bring — would be part of a post-publication process.  Fitzpatrick’s proposal is, of course, riddled with flaws (mainly of a practical nature), but the fact that we can even entertain it as a serious suggestion is instructive in itself.

Internet-based knowledge-aggregations systems — wikis, open-source software, blogs —  encode a new model for editorial practice, as communities of readers pool their ideas in a dynamic and fluid system of exchange. The journalist and blogging guru, Cory Doctorow, likened the Internet’s economics of abundance to “a commons where the sheep shit grass.”  It’s as colorful a metaphor as one is likely to come across in a discourse that is regrettably low on literary flourishes. The difficulty, as Fitzpatrick acknowledges, is how to reconcile this system with a culture in which reputations and credentials are indexed in an exclusively individuated manner. A degree of pluralism, in other words, is invading a sphere in which singularity was the measure of achievement. Quality control as we know it presupposes an editorial process that is, in the final analysis, stringently hierarchical, and the notion of a “content-agnostic” editorial process should, if taken literally, strike terror into the heart of any reasonable person. The whole point about scholarship is that some ideas are more persuasive than others — we are always searching for the right answer — whereas agnosticism by its very nature presupposes uncertainty. Seen in this light, the digital revolution threatens to flood the institutions of knowledge production with all manner of discredited irrelevancies, a final triumph for the specious egalitarianism of postmodernist thought.

As Fitzpatrick observes, our understanding of authorship is, at the present time, caught between two regimes: one a system of knowledge production informed by Enlightenment-era notions of the self, the other is a world of “technologies that lend themselves to the distributed, the collective, the process-oriented, the anonymous, the remix.” As we step into the future increasingly governed by the latter, we move, in some ways, back to an earlier era: a move away from a culture of isolated reading — the individual reader, alone with a book or a screen — towards a more communal engagement, the coffee-house or fireside model of public reading and debate in which literary culture historically originated. Long before print culture, storytelling was not a solitary experience but a group event. So 21st century man, for all the urgent, missionary zeal with which he clogs up his world with cold, impersonal technology, is still just being the same old social animal.

Publishing, Technology, and the Future of the Academy 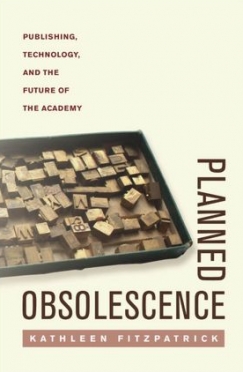