WHEN I WAS growing up in San Francisco in the 1960s and ’70s, I read every baseball book on the shelves of the libraries of my grammar school, junior high, and high school and the local branches of the public library. I absorbed them the way a nine-year-old immigrant might take in a new language. I could have told you the statistics for every Giants player, and I knew all that was publicly available about Willie Mays, Juan Marichal, and Willie McCovey. My big brother thought of me as an idiot savant of baseball statistics and of the kind of information one could glean from the backs of baseball cards. Tom Seaver wasn’t my favorite player, but I read at least three books about or supposedly by him before he was even 30 years old.

He was the Fresno kid with the bright boyish face, a star at USC before he became a superstar with the New York Mets when they “miraculously” won the World Series in 1969. Even during his lone year in the minor leagues, his manager said he had “a twenty-one-year-old arm and a thirty-five-year-old head.” He was probably the greatest pitcher in the majors from the late ’60s into the late ’70s, though he continued pitching past his prime up to 1986. He and his wife Nancy, whom he met at a community college in Fresno, were the darlings of New York for a few years before their pristine image suffered a few dings:

Seaver’s new marketing agent, Frank Scott, seeking to quickly capitalize on his client’s white-hot fame, took out an ad in the New York Times that essentially proclaimed “America’s couple” to be for hire. “Now available: Tom Seaver, America’s top athlete and sports personality, plus Nancy Seaver, Tom’s lovely wife, for those situations that call for young Mrs. America or husband-and-wife sales appeal.” It was terribly tacky and shocked a lot of Seaver’s family and friends — most notably his mother. […] To New Yorkers, Seaver was a deity. An untouchable. The perfect athlete: handsome, articulate, and intelligent, with a beautiful wife whom he clearly loved dearly and to whom he was faithful.

Off the field, he was glib and approachable and, for a baseball player, considered to be something of an intellectual. Everyone respected his achievements, work ethic, and talent, but eventually his statements against the Vietnam War and his advocacy for the players’ union garnered the ire of Mets management and disparagement from a right-wing sportswriter, which led to a humiliating trade to the Cincinnati Reds in 1977 at the peak of his career.

Reading Bill Madden’s Tom Seaver: A Terrific Life in the wake of Seaver’s death on August 31, I was a little embarrassed by how much I already knew. I knew that he had studied dentistry at USC, that his father was a raisin executive and a great golfer, and that his brother was a sculptor. I knew that George was his first name, and, most significantly, I knew by heart, like a childhood phone number or address, his pitching stats for every season from 1967 through 1976. I was grateful to read Hall of Famer Billy Williams’s recollection of Seaver’s pitching motion: “And if you picture him, when he threw the ball, he always dragged his knee — that knee would always go to the ground, and he threw the ball low.” Of course! I had imitated his motion when I was playing backyard and schoolyard games.

I’ve gobbled up heaps of sports biographies over the decades, seldom bothering to distinguish between good ones and bad ones. The way your relative who loves Broadway shows loves them indiscriminately, that’s me with baseball books. One thing I can definitely say is that there’s real feeling in this one. Madden, a longtime sportswriter, knew Seaver personally, used to write about him in the Daily News way back when, and conducted interviews with him for the book. Tom Terrific was, in Madden’s admiring account, an honorable and well-liked man, husband, father, and teammate. As recounts of glory days are apt to do, the book does occasionally become sappy:

On a gorgeous Napa Valley afternoon in late September 2009, Seaver and I were sitting on the bench at the back of his vineyard in Calistoga, talking about wine and baseball, when he began reflecting on the ’69 season, trying to put it in context. “When I was a little kid,” he said, “my favorite book, which my mom used to read to me, was The Little Engine That Could, about the little locomotive that huffs and puffs and keeps repeating, ‘I think I can, I think I can,’ as it pulls this heavy train over the mountain. That was us.”

Despite the nostalgic pleasure of revisiting beloved baseball seasons, the more interesting sections of the book are about Seaver in retirement. He was 42 when he stopped pitching, and his final 33 years get about an eighth of Madden’s 300 pages. Seaver worked for a few years as a broadcaster for the Yankees alongside Phil Rizzuto (for the funniest baseball poems of all time, see O Holy Cow!: The Selected Verse of Phil Rizzuto) and on national TV for a year with the legendary Vin Scully, who was so engaging on broadcasts that I couldn’t help following the Dodgers for 15 years while living in Santa Barbara. Seaver’s color commentary wasn’t exactly charming, but he was interesting.

In 1991, however, “Tom continued work on his long-envisioned pet project: a spectacular, sprawling woods garden in the backyard of their Greenwich home. It was during that project that he contracted Lyme disease.” In 1998, when the Seavers moved back to California to open that Napa vineyard, the disease returned and began tripping up his once-fine memory and upsetting his characteristic poise. He continued laboring in the winery, which began to win prizes that he credited solely to his experienced winemaker, but by the mid-2010s he was forgetting more and more of his own life and baseball career.

During his last year, he was no longer communicative due to dementia. His death is not discussed as the biography was rushed into print, presumably for the Christmas trade. It is exactly the kind of book I would have appreciated receiving as a gift. Any book-reading baseball fan who lived through the Seaver era would certainly enjoy it.

Bob Blaisdell is a reviewer and teacher living in New York. He wrote Creating Anna Karenina: Tolstoy and the Birth of Literature’s Most Enigmatic Heroine. 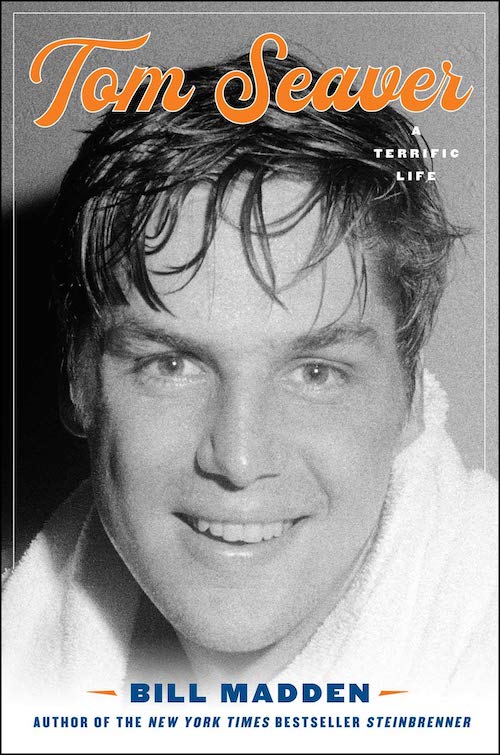