FEW PUBLISHERS HAVE CARRIED THE BANNER of crime fiction as highly and proudly as Charles Ardai’s Hard Case Crime. Since breaking onto the scene in September 2004 (with a reprint of Lawrence Block’s Mona, retitled Grifter’s Game), they’ve maintained a consistent, and consistently impressive lineup of both new and classic novels — until last fall, that is. It was a gut-punch to rival any of the blows in their books: Dorchester, Hard Case’s parent company, had decided to stop publishing mass-market paperbacks. But now, one year later, Hard Case Crime is back with a new publisher (Titan), and a rock solid roster of crime fiction heavyweights. Lawrence Block dusts off his four-decade-old penname, Jill Emerson, for Getting Off (think X-rated Cornell Woolrich); Max Allan Collins’ iconic hitman, Quarry, gets his ninth outing in Quarry’s Ex; Collins also puts the finishing touches on Mickey Spillane’s unfinished novel, The Consummata, set amidst the Cuban exile community in 1970s Miami; and Christa Faust pulls porn star-turned-vigilante Angel Dare out of Witness Protection for another wild ride in Choke Hold.

Christa Faust’s first Angel Dare mystery, Money Shot, caused a sensation when Hard Case released it in February 2008. In creating Dare — a feminist porn star action hero and avenging angel who stepped into her G-string and heels and loaded her gun to take down a sex slavery syndicate — Faust rewrote the femme fatale guidebook and upended the whole noir spectrum. Fans of Money Shot have been waiting over three years for a sequel, and Choke Hold lives up to all the first book’s promise. It cements Faust’s reputation as a major new voice, and takes Angel Dare in a new direction. Instead of revisiting the adult cinema world, Faust digs into the world of Mixed Martial Arts.

As the novel opens, Angel Dare is waitressing in a cheap Yuma diner. Coincidentally, “Thick” Vic Ventura, a co-star from her past, is enjoying a family reunion in the very same spot with his estranged son, rising MMA star Cody. Before the three can get familiar, however, a group of hopped-up gangsters shoot the place up and kill Vic. Taking it on the lam, Angel and Cody have to figure out whose past is catching up with whom. Is it the Eastern European sex syndicate Angel testified against? Or is it the underground Mexican fighting ring where Cody’s been moonlighting? Teaming up with Cody’s punch-drunk colleague, Hank, Angel struggles to fulfill Vic’s dying request: that Cody make it to a national MMA audition in Vegas.

Written in a casual-but-confident first person perspective, Faust skillfully weaves some of today’s most kinetic hardboiled action with her endearingly earthy humor and moments of unexpected poignancy. She’s capable of both sheer raunch (“And if you think I’m still gonna blow you after you shit your pants, you’re out of your fucking mind”) and quiet moments of reflection (“Regret. Christ, I’d been living with that particular emotion for so long it felt as intimate and familiar as my heartbeat”). After a follow-up this strong, I hope we don’t have to wait another three years for Angel Dare’s next adventure. 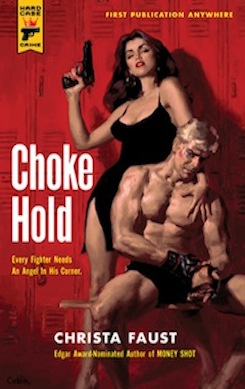