MEGAN ABBOTT HAS MADE a name for herself as a modern-day “Queen of Noir” with her stylized, shadowy tales of twenties starlets and fifties housewives. She’s known for bringing femininity into a generally masculine genre, replacing all those monosyllabic detective types with hardboiled vixens and casting them in complicated, intoxicating, confusing relationships. In this newest novel, her heroines are a brilliant if unlikely pick for the genre; a pack of gum-snapping, finger-popping, boy-destroying teenage girls with pom-poms in hand. If varsity cheerleaders don’t already give you the chills, they will by the final pages of Dare Me.

Colette French is the new varsity cheerleading coach at Sutton Grove High, set in modern-day Anywhere, America. “Coach” is tough-as-nails and stunningly beautiful, and she’s there to whip this squad into shape. In so doing, she dethrones Squad Captain Beth Cassidy, queen of the mean girls and lifelong best friend to Addy Hanlon, our narrator. Addy has spent a lifetime in Beth’s shadow, playing the role of “her forever-lieutenant, since age nine, pee-wee cheer,” and holding the dubious honor of being the only person who understands Beth’s need to be cruel and her increasingly wild, erratic behavior. Beth is wonderfully dangerous; power-hungry, seemingly capable of anything, the kind of girl you don’t want to make an enemy of. But making an enemy of Beth is, of course, Coach’s first move. Perhaps even worse than taking away her title, Coach has the audacity to notice Addy, Beth’s permanent second-in-command. Coach gives Addy the attention she’s always been denied, and Addy eats it up (really, you can’t blame her). Coach fans these flames by first inviting Addy into her home, then her life — finally she lets her in on a very dark secret…a few of them, actually. We’re watching this unfold through Addy’s eyes, and with her we also keep a close eye on Beth, whose combined status as best friend and local despotic sociopath make her a particularly complicated figure for Addy to manage. And manage her, Addy must. Beth is excluded, alienated, and growing increasingly angry. She’s losing control, not only of Addy, but of the squad as a whole, which improves exponentially under new command. Coach drives them to new heights (literally, they become able to take on ambitious new “stunts,” throwing each other high into the air).

This is a perfectly rendered love triangle: two too-close-for-comfort female relationships (something Abbott seems to specialize in), in direct conflict. Then, all of a sudden, there is a body and a whole slew of hazy details. Coach’s imperfections become monstrosities. Addy, caught off guard, fumbles with the pieces of a moving puzzle. And all the while Beth, shark-like, circles the scene.

One of the most thrilling aspects of Abbott’s storytelling is her magician-like sleight of hand; we sense that something terrible is about to happen, but our focus is somehow distracted, just off to the side, so that the turn we thought we saw coming is not at all what we thought it would be. Just when we think we’ve got it all figured out, we’re delivered another blow. This is classic noir, and Abbott delivers each beat so cleanly and neatly one has to wonder if plot comes to her like breathing.

“What’s over there?” I finally ask, gaze fixed on the sofa, the sense that it’s living, its black leather lifting like a beetle’s sheath.

“What is it?” I say, my voice lifting. “Is there something behind there?”

She won’t look, which is how I know.

There is something particularly seductive about Abbott’s voice. Something almost intoxicating. Her writing has a sensation of probing as she explores these characters in all their intense complexities, their girl-on-girl glory. Addy wonders:

Did [Coach] look at us that first week and see past the glossed hair and shiny legs, our glittered brow bones and girl bravado? See past all that to everything beneath, all our miseries, the way we all hated ourselves but much more everyone else? […] To something else, something quivering and real, something poised to be transformed, turned out, made. […] She could make us, stick her hands in our glitter-gritted insides and build us into magnificent teen gladiators?

There’s an almost icky up-close feeling to passages like these, and to the way we’re brought consistently in; in with the coolest girls in school, inside of locker rooms and dark bedrooms, participating from the backseat in illicit rendezvous in cars we never thought we’d get into. Abbott glories in this insider status, getting drunk on it, and arrogant. “We’re the only animation in the whole drop-ceiling, glass-bricked tomb of a school,” Addy says, “We’re the only thing moving, breathing, popping. And we know it […] Look at them, that’s what we can hear them – everyone – say when, Game Day, we stride the hallways, pack-like, our ponytails rocking, our skirts like diamonds.” Even our sympathetic narrator, the one working opposite her best friend’s maniacal lust for power, is constantly looking down at the world around her. Addy’s take on life: “God, it must be terrible not to be on cheer. How would you know what to do?”

Abbott’s stories live in all the things that lurk behind closed doors, and you have to love her choosing to find the heart of darkness in this world of cheer. It works because it’s based in truth. There’s a whole lot of crazy in a pack of hormonal adolescent girls. Especially when they are starving themselves and torturing their bodies. The true underbelly of this book is in fact no belly at all, but a taut set of tan, perfect abs, whipped into submission and growling with hunger, ready for a fight. These girls are engaged in some sort of endless battle, with themselves, with each other. If anything, This Is War is a theme that Abbott almost overly emphasizes. First there is her inclusion of characters who actually are soldiers. But it’s really way beyond that, in an unforgivingly endless use of military metaphor. “We are phalanx-spread four deep across the floor […] We are assembled soldiers,” is how Addy is constantly describing the squad. “You may have the bodies of young girls,” Beth says in a pre-game speech that sounds more like the classic stuff of pre-battle scenes, “but you have the hearts of warriors. Tonight, show me your warrior hearts.” These are the tip of the iceberg. Open the book to any page and you’re reminded that this isn’t just a squad, but an army.

Abbott’s attempt to combine purest noir with the modern day world is generally a triumph, but the concept has a few cracks. Addy’s heavily stylized voice is perfect for narration, but sticks in the mouths of characters when it seeps into dialogue. Beth, in particular, speaks impossibly at times. She’s prone to uttering phrases like “arrow in the quiver, at daggers drawn” or “you come at the King, you best not miss.” Sure, this lingo fits into the larger thematic battle motif and Beth’s tendency to “talk big” is mentioned more than once, which sort of explains this (or wants to). But her manner of speech is at times downright distracting, and it prevented me from ever getting a good handle on her as a character. I was similarly confused by Coach’s constant cigarette smoking. I understand the instinct – what is noir without the endless wafting of smoke, the lifting of cigarettes to lips and lighters to tips? I honestly might’ve preferred to find out, rather than trying to envision this Coach French with tight skin so healthy it gleams not only chain smoking but doing it openly, and at school. Hell, she smokes nonstop in her office. I imagine this was a conscious choice Abbott made, a little shout out to noir. The thing is, she doesn’t need it. She’s already got noir in spades…

A friend of mine was the lone female staff-writer on an undeniably “masculine” TV show. Scripts were all macho, full of tough-guy swagger and lots of big talk. So what was she doing there? The guys told her one day, gathered around a script in the writer’s room. What they needed her for was “feelings and stuff.” Now my friend could drop mean one-liners and violent anecdotes with the best of them, but she realized she was also often the only voice questioning the emotional state of the characters, or wondering about the aftereffects of all those flashing guns, explosions, and criminal betrayals. That voice is vital. Stories are so much richer when they’ve got the “feelings and stuff”. I do not mean to suggest that men can’t grasp emotions, or that women are limited to grasping them and little more – I only share this nugget because I think it speaks to what I love most about Megan Abbott’s presence in the literary landscape. What she is doing for her traditionally manly genre-of-choice is precisely this: Feelings and stuff. She spins tales of mystery and murder in pitch-perfect noir while simultaneously probing the sticky humanity pulsing underneath, bringing newfound emotional depth to the genre as a whole, thereby modernizing and elevating it. Now that is what I’d call a “woman’s touch.” 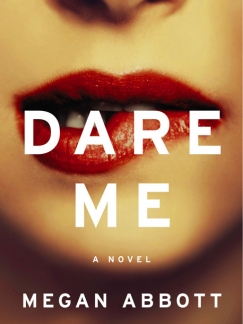