BREVITY does not guarantee simplicity. Julia Gfrörer’s graphic novella from Fantagraphics, Black Is the Color, provides a key example with its desolate environments and sparse dialogue. The quick read makes good use of Gfrörer’s charm: her ability to relate much to the reader with little on the page. When she chooses to fill out the panel, as seen in the cover’s swirling maelstrom dotted with the inquisitive heads of mermaids and mermen, her pen work captures fine detail expertly. Wood grain, sea foam, shadows, hair — all with short distinct strokes — are the minutiae that give balance to her romantic narrative, grandiose landscapes, and intensely dark and desirous gothic mood.

Named after a traditional Appalachian folk song, “Black Is the Color (of My True Love’s Hair)” (do yourself a favor and put on Nina Simone’s famed rendition now), Gfrörer’s tale, like the song, is one of abandonment and affection. The story follows Warren, a sailor set adrift by shipmates when food supplies run short in the Strait of Magellan. With a slow and inevitable death close at hand, the remainder of his life takes a fantastic turn when he meets Eulalia, a mermaid who draws into question the life Warren is eager to lament.

Gfrörer has earned a reputation within indie comics for her distinct aesthetic, mumblecore dialogue, persistent overtones of horror and suffering, and unapologetically sexual narratives, all of which come together in complex and surprising ways. One of the most telling scenes from Black follows a group of mermaids chattering amusingly in front of a ship in distress. As the sailors drown and burn to death, the mermaids gossip as though they were not mermaids at all, but 30-somethings suffering an opening act at some Portland bar. The surprising juxtapositions work on nearly every level. Even Gfrörer’s lettering, which betrays the novella’s period setting by exchanging the expected blackletter type (used on the cover) for a playfully casual script. Like Black, her body of work to date is offbeat and well wrought. Far more importantly than being enjoyable, it is also remarkably subversive.

This is where Gfrörer’s use of the gothic aesthetic becomes key. Genre, providing a contrast between life as it is and life as it can be imagined, is one of the quickest and sharpest devices through which to stage social critique, and it is critique that lies at the heart of Gfrörer’s choices. The gothic — a mix of mystery, horror, and nostalgia — has a long literary and visual history as metaphor: Mary Wollstonecraft Shelley’s Frankenstein was a parable of the tragedy inherent in technological progress, Anne Rice’s popular The Vampire Chronicles arose from the depression following the death of her first child, and J. K. Rowling’s beloved Harry Potter series’s magical reinterpretation of the “politics of fear” were born from the author’s own difficulty as a woman and single parent living during Margaret Thatcher’s neoliberal politics.

It is not by coincidence that all of these authors are women (and white and of a certain social class). The gothic genre has historically been understood as an escape from the menial trivialities of life — housework, cooking, sewing — to which women are still mostly relegated. This might also explain why the genre never really goes away, it just simmers, waiting for a catalyst to bring it back to boil. This most recent upswing of the gothic, not by chance arriving in a period of deep social and economic malaise, has produced a post–Harry Potter surfeit of monsters, magic, and Victorian reminiscences. The monsters and damsels we see today have as much to do with fantasy as they do with the war on terror, the 2008 global financial crisis, and the renewed political debates on gender and sexuality. What seems trivial and escapist (“Another vampire movie/show? Really!?”) can actually be the source of interesting commentary if we are willing to read between the panels.

This is the case for Gfrörer, who carries two leads: one of gothic literature’s 200-year-old tradition and a more prominent role in the recent, shorter history of alternative comics. She follows a trajectory set by Dame Darcy, one of the rare early female artists put out by Fantagraphics, whose gothic Lolita-style series Meat Cake has been published inconsistently by that indie comic bastion since 1993. Darcy’s own investment in the gothic tradition utilizes sardonic humor and wordplay to counteract the misogynistic plot devices and heteronormativity that is historically present in the gothic genre. This form of critique harkens back most keenly to the author Angela Carter’s feminist re-visioning of folktales in The Bloody Chamber, in which she reintroduced the highly sexual and grotesque elements previously removed to make the stories more mainstream-friendly.

Gfrörer’s own oeuvre is similarly critical, albeit in a more subtle — almost deadpan — manner. In Black, she mixes the fantastic (mermaids!) with nostalgia (sea travel!) through the language of the modern-day hipster. One pivotal moment in Black shows Eulalia and another mermaid glibly eating raw lobster, discussing their new noise project. (“I was thinking of adding some high-pitched harmonies to it […] like just this side of shrill.”) Next we see Warren returning to dry land, reencountering his pre-story life (complete with wife and child), and choosing to return to the sea. A classic romanticism would have reunited Warren with his family, but Gfrörer refuses: Warren has tasted fantasy and wants more.

The juxtaposition of the mermaids’ banality and Warren’s desire for the fantastic — that the mermaids’ dialogue reveals to not truly exist — brings the concept of fantasy as escape crashing to its feet. Most darkly, Black suggests that there may be no fantasy left. This is not your mother’s romanticism; it’s been remixed with the realism of the millennial age, denying the fantasy of specialness, of a direct connection to someone else. Earlier in the story, Warren inquires about Eulalia’s life, to which she responds, “You don’t want to know about me. You think you do, but you’ll be happier if I let you wonder about it.” He is using her — and she knows it — just as she uses him to make her own life seem more whimsical than it is. Use and abuse, affection and abandonment; according to Black, these are the motives between which the millennial relationship oscillates.

In a recent strip titled Phosphorus for Study Group Comics’s website, Gfrörer draws out a chance encounter between a boy and a female swamp monster. Few words are spoken as the monster inspects and fondles the boy’s penis (“What do you do with it? Show me. Show me!”). Upon ejaculation she leaves the boy on the swamp’s shore, gasping and crying. No cuddling, no romance, no answer. It is dark stuff, but, more importantly, it is grounded so deeply in the most basic questions of desire that it becomes exhilarating.

In an iPhone-dominated world, when the tools to communicate with people not in front of us always lie close at hand, the act of talking face to face seems trite. In the scenario of the 30-somethings at a Portland bar — did you imagine they were actually talking to each other? Or, as seems more likely, that they were surfing Facebook on their smartphones? What lies at the heart of Black’s big question is exactly this: what has happened to true and earnest human desire?

Nina Simone was a powerful black songstress who used desire as a form of insurrection for civil rights within popular music. A famed part of her repertoire was “Black Is the Color (of My True Love’s Hair),” a folk song born from Irish immigrant miners of the Appalachian mountains, a sector of society marked by their bodies and the labor they produced. Simone transformed this seemingly unlikely song into a powerful civil rights ballad. She was awesomely somatic and used her music to relay a deeply felt desire for both love and revolution. In homage, Gfrörer is staging her own coup of contemporary visual culture, attempting to find a home for a similar kind of desire within the world of independent comics. Where she finds none, Gfrörer creates desire through voracious and monstrous female characters.

While reading Black, one can feel the shifting position of Gfrörer’s own identification with her characters. On the surface, she feels like Warren — lost at sea, abandoned by those he trusted, and desperate to find a true connection. The novella’s most telling moment comes on its last page: “This book is dedicated to Dylan, to Matthew, and to everyone who left me for dead.” But who Gfrörer wants to be is Eulalia, the savior who guides Warren through the waning moments of the horrifying predictability of life. True to the blunt nihilism of the story, Gfrörer provides no answers upon reaching the last page. What she does provide is the fantasy of desire, something to look forward to in her future work.

Black Is the Color is marked by an impressive poeticism in pacing, dark and intricate drawing, and a refreshing contemporary spin on gothic storytelling. It also marks a thrillingly mature period in Gfrörer’s career.

Black is the Color 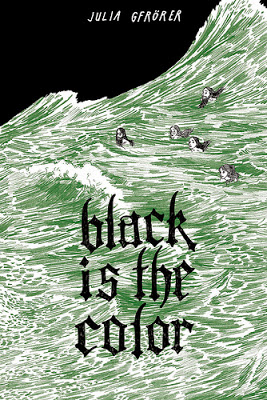