LUMINOUS, PENETRATING, AND UNCANONIZABLE, the writings of 20th-century French philosopher Simone Weil were neither originally conceived as books nor published as such during her lifetime. The dissemination of her work began with the posthumous publication of Gravity and Grace, a selection of aphorisms culled from the notebooks she’d kept in Marseilles before leaving for New York in 1942. In subsequent years, more than 20 volumes of her writings on politics, science, Greek classicism, history, geometry, philosophy, trade unionism, and theology have appeared. Weil famously died of cardiac arrest brought on by tuberculosis and starvation in London in 1943 when she was 34 years old. Gravity and Grace was published five years later.

Weil’s extraordinary life, like her writings, exemplified most of the dissonances of her age. Born in Paris to an upper-middle class secular Jewish family, her precocious, driven childhood was marked by an unusual sensitivity to the suffering of the poor, which led her early towards Marxism. Attending the elite École Normale as one of its first three female students, she was a philosopher by vocation, but apart from her lycée professorships, she did nothing to advance her intellectual reputation. She was far too absorbed in developing her ideas — a project, she believed, that could only be pursued experientially. Traveling to Germany in the early 1930s, she warned French leftist colleagues of fascism’s deep and dangerous appeal. She organized the unemployed, taught Worker’s Education, debated ideology with Leon Trotsky and, at age 25, took a year’s leave from her lycée professorship to work in a factory. Doubtful of the French left’s ability to reach, much less represent, workers’ experience, she wanted to know for herself what it means to be dispossessed.

Throughout that year Weil suffered from headaches, didn’t eat and recoiled from scoldings, learning first-hand the existential state of malheur — bad happiness, or affliction — a condition she would later describe in her notebooks as “anonymous … it deprives its victims of their personality and makes them into things. [The afflicted] have no words to express what is happening to them.” Two years later, volunteering to fight in the Spanish Civil War, Weil observed the narcotic effects of power and violence. Exhausted and disillusioned, she traveled through Italy in search of beauty. Alone in a small chapel, she found herself overwhelmed by “something stronger than I was [that] compelled me for the first time to go down on my knees.” Her subsequent work was informed by a yearning towards God, i.e, a supernatural, absolute Good that can be approached only through selfless attention, a detachment borne of humiliation; a state described by Georges Bataille as “unknowing” and by Proust as “knowledge through pain.” “Affliction,” she wrote in The Need for Roots, “confers immense prestige so long as it is accompanied by strength.”

“I do not separate my thought from my life,” Weil’s near-contemporary Antonin Artaud wrote in one of his many manifestoes, Situation of the Flesh. Because Artaud repeatedly proclaimed himself a poet and a madman, his practice — his singular performativity of ideas — has been easily incorporated into our histories of high modernism. But Weil — a young woman, clumsy, cerebral, thin, and poorly dressed — wrote no manifestoes. Consequently, her work remains as vulnerable in death as it was in life. Until now, little serious discussion of her work has appeared. As Palle Yourgrau argues in his introduction to his subtly polemical new book: “The hagiography of Simone Weil has … provided a convenient excuse not to take her ideas seriously … [She] remains a marginal figure.”

Adopted by the Catholics (a faith she never fully embraced) as a near-saint, she has been vilified as a bad Jew, a spoiled brat and — in Francine du Plessix Gray’s stunningly dismissive 2001 biography — a manipulative anorexic. “Simone’s cross-dressing and her need to disfigure herself into a caricature of the beautiful girl she could have been,” du Plessix Gray writes, “were related to far darker, more tragic aspects of her personality: the despair caused by her general sense of unworthiness, her sense that she was plain and somehow incomplete and could not be loved as a woman.”

But why should anyone, much less a philosopher, be expected to cultivate self-worth? Weil, as Yourgrau wryly notes, “was not writing a cookbook for healthy souls.” Asserting her kinship with Nietzsche and Wittgenstein — dangerous thinkers whose work defies categorization and who use argument as only one of their many weapons — Yourgrau argues that Weil’s life “is not in itself the ‘real story,’ but rather a picture, a representation of something more real.” He then proceeds to enact a comprehensive philosophical reading — to my mind, the first — of Weil’s work.

A philosophy professor at Brandeis, Yourgrau is well equipped for the task. Best known for his 2004 book A World Without Time on logician Kurt Gödel (who proposed, among other things, time travel as the logical extension of Einstein’s relativity theories), Yourgrau is a master at tracing the hyper-sanity within dense philosophical systems that appear, to the untrained, as madness. While paying nominal respect to Weil’s detractors, he proceeds to demolish their claims and methods, especially their inclination to use Weil’s biography as a means to examine her thought. To Yourgrau, Weil’s malheur is not a penchant for masochism but a philosophical process of emptying, similar to those described by Pascal and St. Augustine. Her fascination with Greek thought (a fascination also shared by Wittgenstein) was not a delirious dilettantism; it led, among other things, to her perception of the critical difference between algebra and geometry. As she wrote in an essay on Max Planck’s physics, “algebra puts everything on the same plane … It is quite flat; the third dimension of thought is absent from it.” More controversially, there is the issue of Weil’s Judaism. While scholar Rachel Brenner described Weil as “unable to accept herself as a Jew” and Jeffrey Mehlman as “a Jew who switched sides” and turned “profoundly anti-Semitic,” Yourgrau sees a proximity in her writings on Judaism to Elaine Scarry’s notion that the New Testament enacts a symbolic inversion of the body in pain. To Yourgrau, Weil’s refusal to accept the Jews as the Chosen People is not anti-Semitism. Rather, in the context of Nazism, “faced with a new dawn of nations rising up to claim their birthright as the ‘Chosen People’ … Weil, the philosopher, is searching not for a means to destroy them, but for the very meaning of destruction, of force.” Writing in her notebook that the Nazi invasion of France was “a great day for Indo-China” was not proof she “despised herself for being a Jew,” but rather, in Yourgrau’s view, a statement against tribal nationalisms of all kinds. Quoting an essay by David Reiff, he notes Weil’s acute, timely sense that “different people are occupying the same space but living through different historical epochs.”

In a fascinating discussion of eating, perception and transubstantiation, Yourgrau examines an aphorism coined in the Gravity and Grace notebooks used often by Weil’s detractors as proof of her alleged anorexia: “The great trouble in human life is that gazing and eating are two operations.” She was, he points out, discussing the Platonic notions of Beauty and Good, not the consumption of pizza or hamburgers. “The beautiful,” Weil wrote, “is that which we desire without wishing to eat it. We desire that it should be.” In ontological terms, eating is an act of everyday violence. Drawing on the work of philosopher Leon Kass, Yourgrau explains that to eat means, in fact, “the willingness to homogenize and destroy the world … to swallow and turn it into oneself.” To eat is to consume the other — we eat our friends and lovers. Gazing, on the other hand, is an act of attention: of allowing ourselves to be penetrated by things outside ourselves without diminishing their integrity. Through her writings, Yourgrau points out, Weil is augmenting the Buddhist idea of detachment with a beneficence drawn from Greek thought and Catharism.

To the extent that Yourgrau narrates the episodic events of Weil’s remarkable life, it is in this spirit of gazing: “She will revisit the lost world of the medieval Cathars,” he writes,

in southern France, where Greek and Christian ideas were married … only to be crushed in the thirteenth century by kings and crusaders — an oasis of idealism floating in the desert of history… The past for her is not dead. She is turning to history, real and imagined, “scavenging” through time as if it were space.

Yourgrau’s scrupulous attention to Weil’s thought is a gift. Reading his book I’m reminded of all the later writers and thinkers who would revisit ideas she expressed in her notebooks: Maurice Blanchot on the muteness of trauma, Franz Fanon on Eurocentric chauvinism, William S. Burroughs on the algebra of need. Paying this great philosopher the compliment of discussing her work in its own terms, Yourgrau has, for the first time, given the breadth of Weil’s thought the expansive frame it deserves. 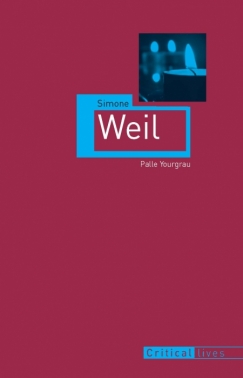