WHAT CAN A WRITER DO? In 2008, Sarah Manguso’s friend Harris jumped in front of a train pulling in to a station. In 2006, he had escaped from a psychiatric hospital after several psychotic breaks. In this book-length elegy, Manguso remembers, recreates her friend. They were never lovers, in that way. “We loved our secret. We thought it was that we didn’t love each other.” They lived together in a house of friends in Cambridge during college, then moved to an apartment in Manhattan. Harris liked whitefish. He “never listened to music on the subway…because he liked to hear the sounds of the city.” From these and other details we readers come to know Harris.

Manguso meditates on his presence and his absence. She tries to inhabit, to understand, his psychotic breaks: “The dictionary defines psychosis as the abnormal condition of the mind, which doesn’t narrow it down much. The clinical definition narrows it down to a loss of contact with reality, but how does one make contact with an abstraction?”

She remembers the times he would call from some other place and ask Sarah to find a road atlas and navigate him: “As in the old story, the wanderer hears a disembodied voice that leads him out of the desert. It worked so well that for months afterward, whenever he was lost, he called me. It was always nighttime in New York, and I’d look at a road atlas under my desk light and tell him what was there.”

The Guardians is a portrait of a friendship, before, after, during. Manguso has made something indelible, which is what, I think, she set out to do. 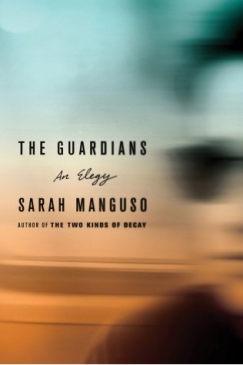