AT AGE 86 Mikhail Gorbachev is still at it, posing that eternal Russian question, “What is to be done?” in his new book, The New Russia. Unfortunately, it arrives on American shores at a time when interest in Russia seems pretty well limited to what role it may have played in our last presidential election. But then, this isn’t the first time that the last leader of the Soviet Union has produced something significant and underappreciated.

Like many Russian memoirists before him — including Leon Trotsky — Gorbachev is less interested in autobiography than in politics and policy. But since this volume stands as an apologia for an entire career, some degree of autobiography is inevitable. He writes of a typical Soviet childhood that included writing school essays lauding Stalin, followed by a young adulthood that coincided with Nikita Khrushchev’s ideological and cultural “thaw,” and, more profoundly, the Prague Spring of 1968 — Alexander Dubček’s failed attempt to put a “human face” on Czechoslovakia’s socialist regime. Speaking of a Czechoslovak friend from Moscow State University who became a leader in Dubček’s movement, he writes, “Like Zdeněk [Mlynář], I needed time to gradually overcome, on the basis of my own experiences in life and discovery of other trends of social thought and opinions, a dogmatic understanding of socialism imposed on us in a closed society from our student days.”

The Prague Spring was crushed by the intervention of Soviet troops, and Gorbachev retains a painful memory of “workers at the Zbrojovka Brno arms and vehicle factory turning their backs on us when we tried to start a conversation with them during a Soviet Communist Party visit to Czechoslovakia in 1969.”

When he reached the top in the 1980s, he tried to put the lessons of the Spring into practice: “The motto of our Perestroika [restructuring], ‘For a humane, democratic socialism,’ was consonant with the ideas of the Prague Spring, the thinking of our intelligentsia in the 1960s and of the Eurocommunists in the West.” By that time, the Soviet system may have been too severely weakened by a stagnant economy and the centrifugal forces of nationalism to be saved by reform. Matters slipped out of Gorbachev’s hands, leading to “the worst strategic mistake” — the dissolution of the entire country when then president of Russia, Boris Yeltsin, and the heads of Belarus and Ukraine formed the now-defunct entity called the Commonwealth of Independent States. Gorbachev resigned as president of the Soviet Union, he tells us, to head off a possible “slide into civil conflict, and possibly civil war.”

But although he knows some wished to “see the back of me” on his way out of the country, he stayed, even running for president of Russia in 1996 against Yeltsin, who was reelected. The victor comes in for the book’s most withering criticism, accused of having “destroyed the Soviet Union, shelled the first Russian parliament, fused government and big business together” and “initiated a chain of events that largely determined the departures from a democratic path of development that we have witnessed over the following years and up to the present day,” all the while giving “the green light to Russia’s criminals.” Gorbachev “thought the stance of the leaders of the West, with their unconditional support for Yeltsin, was dangerous, and supposed they did not understand the situation.”

Not disputing the fact that he lost badly, because the reformers who supported him had failed to unify, he does suspect that his actual vote exceeded the totals reported. In general he believes “there have been no fair and free elections in Russia since those of 1989, 1990 and the election of 1991 when Boris Yeltsin became the first president of Russia.” Gorbachev himself was physically attacked during the 1996 campaign, and tells of a supporter who disappeared, never to be seen again.

Regarding his own politics, the first thing he wants us to know is that he is not a “radical liberal” — that is, a free market enthusiast. Тhe economic “Shock Therapy” imposed on Russia by American economic theorists and their post-Soviet counterparts proved disastrous. “Russians,” writes Gorbachev, “have known no comparable fall in the level of social welfare since the Great Patriotic War of 1941-5.” Indeed, “[i]nstant liberalization of prices and hyperinflation had effectively expropriated the population’s savings to the tune of some 800 trillion roubles, or $160-170 billion,” while “[t]he ‘loans-for-shares auctions’ of 1996-7 were an unprecedented act of giving away state property for a pittance to a select coterie of individuals.” The standard of living did not return to its 1990 level until 2005.

Although clearly harboring little respect for Yeltsin the man — he writes of Yeltsin’s drinking in his office, arranging immunity for himself, and clownishly appearing on TV in camouflage holding a rifle — the root of their differences lies in their divergent worldviews. “Both in the 1990s and later,” Gorbachev writes, “I was certain that what was missing from Russia’s political spectrum was a strong social democratic party,” but, he admits, “[i]t would be disingenuous of me to claim that before Perestroika I had the appreciation of social democracy that I ultimately developed.” Citing the late Swedish Premier Olof Palme and German Chancellor Willy Brandt as influences, he writes of telling a gathering of the Socialist International:

The downfall of totalitarianism in the former Soviet Union was the collapse of a particular system that was called ‘socialism’ and seen by many as such, whether from a hostile standpoint or with approval and a sense of solidarity. In reality it was not socialism. The values that usually inform the concept of socialism, however, are as relevant today as ever. They have inspired many generations of champions of liberty, equality and fraternity and have brought vast mass movements into being.

Indeed, the People Magazine–style coverage he gleans in this country could hardly prepare one for the idea of Mikhail Gorbachev as a 21st-century dyed-in-the-wool social democrat. Nor would one guess that he finds himself returning to the Soviet Union’s first leader, Vladimir Ilyich Lenin, “again and again, as a politician and thinker deserving of his place in history.” Referring to Lenin’s last writings from the early 1920s, generally suppressed in the Soviet Union and little known in this country, Gorbachev tells us that the leader’s “comments on the need for ‘a fundamental change of our entire point of view about socialism,’ as well as his words about a transition from the earlier, revolutionary approach to ‘a completely different, reformist way forward’ had a profound impact on me.”

Addressing the only Russian issue of concern to mainstream American media — current President Vladimir Putin — Gorbachev speaks of an “electoral system […] increasingly being turned into a pure formality.” He considered the 2011 election “fraudulent,” and concludes, “I really wish the president would understand how important it is to step down at the right time.” It’s worth pointing out that, at the moment, one of the few surviving critical voices in the Russian media is Novaya Gazeta, a newspaper of which he is part owner.

Less likely to find favor among American audiences, however, is Gorbachev’s view that Putin is not always wrong. For instance, he felt Russia had no option but to react in 2008, when “Georgian armed forces, after firing on Russian peacekeepers, subjected the [breakaway] South Ossetian capital of Tskhinvali to a missile bombardment and occupied it.” He continues:

I suppose what incensed me no less than the adventurism of Georgian President Mikheil Saakashvili in ordering the bombardment and attack on a peaceful city was the reaction of many politicians and most of the media in the West, which declared Russia the aggressor for ‘attacking little Georgia.’ One of the first to expostulate that ‘Russian aggression must not go unpunished’ was US Vice-President Dick Cheney, thought to be the main instigator of the US invasion of Iraq in 2003.

In light of this, and of his views on what transpired in 1991, we should not be surprised that he also sees “the main, deep cause of the Ukrainian events [that is, the Maidan protests and the subsequent invasion of the country by Russian troops] in the disruption of Perestroika and the mindless, reckless ‘disbanding’ of the USSR.”

He feels the expansion of NATO has “fundamentally undermined the European modus vivendi”; to his mind, the organization has “started behaving like a policeman charged with maintaining order in Europe and even the world.” NATO’s actions in Kosovo, in particular, created a “dangerous precedent […] of military action undertaken against a sovereign nation [Serbia] without authorization by the UN Security Council.” In general, he resents that, “in recent years, Russia has been confronted with one fait accompli after another.”

But the book’s concerns go well past the issues and interests particular to Russia and the United States. Gorbachev gives deep consideration to global challenges, like nuclear disarmament, poverty, and climate change. Now, a quarter of a century after the Soviet Union’s collapse, with the global order once more in flux, may be the perfect moment for a book by a world leader who challenges the orthodoxies both of his own country and those of the West.

Tom Gallagher is a writer and activist living in San Francisco who served as a delegate to the Bernie Sanders campaign, and to the McGovern campaign of 1984. He is the author of Sub: My Years Underground in America’s Schools and The Primary Route: How the 99 Percent Takes On the Military Industrial Complex. 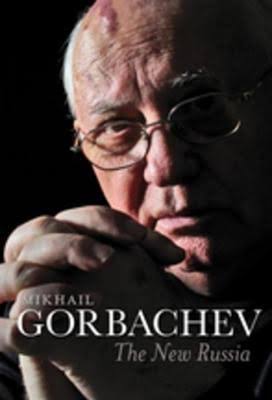