IN THE OPENING story of Nnedi Okorafor’s debut short story collection, Kabu Kabu, a generic fantasy hero, complete with flowing blond hair and the moniker “Lance the Brave,” contemplates throwing himself from the cliff upon which he stands in order to escape the terrifying “shadows” that will, should they catch him, “dirty his very soul.” To his great surprise, he sees a black man floating towards him. Lance watches as the shadows attack the man, who falls to the ground bleeding from a hole in his chest. The man then turns to the shadows and says “You know what I can do to you. You ain’t that stupid.” Identifying himself to Lance as the “Magical Negro” (also the story’s title), the man launches into a tirade against the very stereotype he represents. He is no “fuckin’ shuckin,’ jivin,’ happy Negro” willing to die for his “massa ‘cause [his] life ain’t worth shit.” He asks the astounded Lance (whom he will shortly wave off the cliff to the clueless man’s death), “What world is you livin’ in? Some kinda typical fantasy world from some typical fantasy book?”

With these words Okorafor makes clear that this book, a collection of new and republished stories, is clearly not a typical fantasy book, and in several respects, she is right. The worlds that Okorafor presents in her stories are not set in the cold white spaces of George R.R. Martin, or the Elvish forests of Tolkien: Okorafor’s worlds are urban and dirty; hot and sticky. They are lush, vibrant; they are not set in a long-ago time. They are now; they are also windows through which alternate futures may be glimpsed. These moments — now and then — and these spaces — more familiar than strange —are also African moments, African spaces. Her heroes (more often than not, heroines) regularly find themselves at odds with a society fearful of difference, of magic, despite the fact that several of Okorafor’s stories (as well as many of her novels) lament the loss of magic and mystery in everyday life. In that respect, Okorafor’s work reflects the elegiac nostalgia that can be regularly found in the pages of fantasy; more dominant in these tales, however, is a sense of this world as a contested, conflicted space: an Africa still in the greedy thrall of the West and its own corrupt rulers; children of African immigrants both in awe of their ancestral home and judgmental of its superstitions and perceived roughness. In this Okorafor’s stories move firmly past both the typical fantasy world and typical fantasy book: we are in postcolonial territory here. For Okorafor belongs just as firmly in the world of postcolonial literature as she does science fiction and fantasy; indeed, those genres are really the clay she works to show readers the many faces of Africa (Nigeria in particular), and confronts the psychological, economical, ecological, and political impact of ongoing Western inference on the continent.

She does this most directly in the stories “The Ghastly Bird,” “Spider the Artist,” “Icon,” and “The Popular Mechanic.” “The Ghastly Bird” is a poignant tribute to the extinct dodo bird, one of the early victims of Western colonialism, while the other three stories chronicle the ecological devastation and spiraling violence in the oil-rich Niger Delta region. “Spider the Artist” is arguably the collection’s strongest offering, and the closest to science fiction the collection comes. Eme, a young woman in an abusive marriage living literally next door to an oil pipeline policed by sentient spider-shaped robots known as “Zombies.” This is also the closest to science fiction the collection comes. The story follows the developing relationship between Eme and one of the Zombies whom she christens Udide Okwanka (“spider the artist”), who loves the music she plays on her father’s guitar, and who becomes increasingly protective of Eme as the violence between humans and Zombies (who can be viewed both as stand-ins for the Western oil companies they serve as well as reflective of anxieties regarding artificial intelligence) intensifies. While compelling insofar as it focuses on the Niger Delta People’s Movement, a Nigerian rebel/terrorist group, and the violence and power the group wields against both oil companies and their fellow Nigerians, “Icon,” on the other hand, ultimately falls flat due to a poorly executed narrator. This is interesting given that Okorafor’s strongest writing is usually in first-person. The narrator, Richard, is little more than the stereotype of the ambitious, but ignorant, journalist. To be sure, this fact could very well be part of Okorafor’s intent in this tale – Richard is merely an extension of Western ignorance and arrogance, and he is brought face to face with the brutal realities of the world upon which he seeks to make his name – but his voice, more clunky than deliberately obtuse, clashes with the larger critique of both Western oil interests and the violent NDPM.

Readers familiar with Okorafor’s novels, particularly Zahrah the Windseeker and The Shadow Speaker will recognize the Ginen/Windseeker mythology in five of the stories collected in Kabu Kabu: “How Inyang Got Her Wings,” “The Winds of Harmattan,” “Windseekers,” “Tumaki,” and “Biafra,” the last of which is set during the bloody, terrifying days of the Biafran War. The disjointed, confused perspective of Arro-yo as she attempts to help the men, women, and children she encounters as she flies north from southern Nigeria (Biafra) is the story’s strong suit and point. Arro-yo also turns up in “Windseekers,” an interesting take on a love story (though Okorafor identifies “Asunder” as the only love story she has written: it’s a beautifully imagined tale of a love that threatens to obliterate the separate identities of the couple who fall in love when they meet as children). Set in the parallel world of Ginen, Arro-yo is irresistibly drawn to Ruwan Sanyi, a windseeker she has met, and killed, in another life. More gently, “Asunder” presents the destructive effects of powerful love and attraction, while presenting a peaceful, though still painful, way out; for Arro-yo, nothing short of bloodshed will assure her survival.

Short story collections can be uneven affairs, and Kabu Kabu is no exception. The collection’s weakest offerings are “The House of Deformities” (the first short story Okorafor wrote, back in 1993), “Long Juju Man” (which works much better as the expanded and illustrated children’s tale she published in 2009), and the title story. “Kabu Kabu” – co-written with Alan Dean Foster – like “The House of Deformities,” “On the Road” (Okorafor’s first and only horror story, and one of the collection’s tighter entries), and “The Carpet” all feature one of Okorafor’s recurring character types and situations, a first-generation African transplant who has an unsettling or confusing encounter with the unexplainable while in transit to/in Africa. The unlicensed cab (a kabu kabu) that Ngozi, the story’s protagonist, hails in a desperate attempt to make it to O’Hare in time to make her flight to New York City, proceeds to take her on a whirlwind trip where she shares the backseat with a kleptomaniac vampire, a masquerade, and a serial killer. Ngozi is unfortunately the least interesting character in the story: she lacks the depth of the stronger, more compelling protagonists Okorafor presents, namely, the windseeker Arro-yo, the rainmaker Dikeogu (“Tumaki”), and Eme from “The Spider Artist.”

After dispatching Lance the Brave, the Magical Negro addresses the reader directly, saying, “You need to stop reading all this stupidness. The Magical Negro ain’t about to get his ass kicked no more. Them days is ovah.” With those words, Okorafor sets her reader up for the fantastical and worthwhile journey that ultimately is Kabu Kabu. When the Magical Negro heads off into the forest to go “find him some hobbits, castles, dragons, [and] princesses,” Okorafor also signals that some changes are in order in the typical fantasy world and book. This short story collection is simply her most recent addition to a body of work that is enriching the fantasy/sf genres by linking them to the wonders and struggles of Africa. 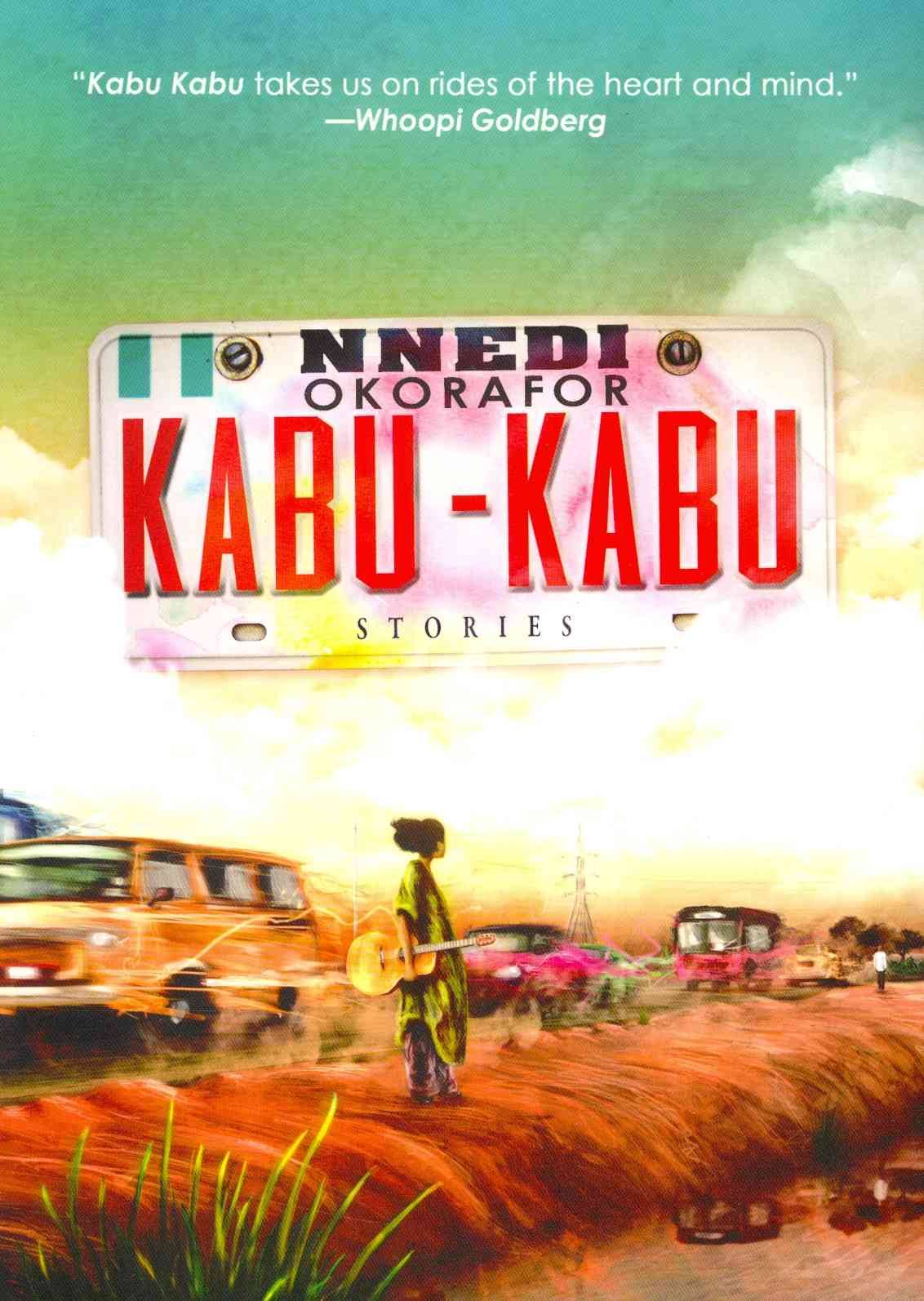