Last week, LARB’s philosophy/critical theory section published philosopher Bernard Stiegler’s response to a manifesto by Geoffroy de Lagasnerie and Edouard Louis that appeared in the French newspaper Le Monde. We are now publishing an English translation of Lagasnerie and Louis’s original text, in the hope that this will further stimulate the debate on the issues that they as well as Stiegler address.

A FEW MONTHS AGO, we thought: “Our generation is living through a nightmare of chaos. We’ve seen the worst of it.” Today the situation deteriorates even further.

We’ve seen,
the images of tens of thousands of migrants fleeing war, destruction and misery, who do not find in Europe a place of protection and reception, a space of hospitality. They find only countries that hesitate, that sort, that send their police, create camps, and close borders.

We’ve felt,
our own hopelessness in observing the way in which the situation in Greece was handled this summer, the brutality with which European institutions imposed austerity on a country already ravaged by poverty, and the revelation of the Euro as an instrument which rends any alternative policies impossible, even in defiance of the democratic will.

There is,
the sorry spectacle of the Socialist party in France, who remains in power but whose continued attachment to the left is questionable, and the disgust inspired by the Macron-Valls axis, which speaks only the language of order and social regression, and the resulting disbelief: how could the left get to this point? How, for example, has France become not a point of arrival for the migrants but a place they must flee?

And finally, there is the ever-increasing circulation in the public discourse of these ideas which more and more resemble those found on the extreme right, and which often precede them to the point that the right feeds off of them and reclaims them as its own. More and more loudly, these ideologues are leading an offensive to inject the worst impulses into the public discourse — populism, Islamophobia, misogyny, xenophobia, homophobia, antisemitism — and crying censorship when they are criticized and identified for being what they really are (“We no longer have the right to say anything!”).

Against this massive political-intellectual dynamic, a general mood is established. It would not be an exaggeration to say that there are many today who make their living off of this disarray and sadness. To experience politics, for most of us now, is to experience powerlessness.

How many people, in the context of meetings and seminars, have expressed to us, often overwhelmed by emotion, both a sense of anger and an inability to act and to express themselves. It’s as if contemporary political and democratic structures were built around dispossession and the inability to intervene.

What can be done? How to speak? What to say? How to say anything other than what’s been agreed upon, etc?

In recent weeks, two debates have too often arisen separately: the first focused on the increasing proximity of the arguments made by a certain number of pundits and writers with those advanced by the extreme right, and the second, regarding the silence of the intellectuals about the political problems. But how can we not see these forms as one and the same? When we unearth the roots of this silence, we see there are three reasons.

1. There is a fascination these days with the extreme right: all it takes is someone like Houellebecq publishing a grossly Islamophobic book to capture the front pages of the papers. This magnetization of a large part of the media-intellectual space toward these offensive issues led many of us to no longer recognize ourselves within this context, and thus to escape the public sphere. The silence of the intellectuals is also their dismay at this situation.

2. The scarcity of criticism is explained as well by the defamation campaigns which have been launched against intellectual figures (Bourdieu, Duras, Derrida, Foucault, de Beauvoir) since the 1980s. The literary and intellectual world as it is constituted today is a product of this offense: this climate of insult eventually discouraged and stifled the dissenting energy.

3. Finally, some of the responsibility lies in the internal workings of the literary and academic fields. Writers, sociologists and philosophers do not dare to engage: for the writers, to intervene would constitute a violation of the purity of literature; for the others, it would call into question the validity of their knowledge. An injunction of depoliticization reigns over the literary and scholarly worlds (the ideology of literature: “l’amour-des-mots,” and academic research for its own sake, etc). Politics is seen as a risk, a stigma — when it’s the political disengagement that should really be seen as the problem.

But we cannot just lament the situation without questioning the means of creating new structures. In fact, all hope is not lost: the Zemmours and Houellebecqs are bent on denying what they really are, and lying. The left continues to dominate symbolically. In France, “intellectual right” remains an oxymoron, better still: an impossibility. We must at least rejoice in that.

If we want to redefine and transform the intellectual and political scene, it is urgent that we adopt some ethical principles for thought and action:

1. Principle of refusal: escape the imposed debates, refuse to recognize the validity of certain ideologues as counterparts, and of certain problems as relevant. These themes make the confrontation of ideas impossible; their removal is the condition of the debate. In contrast to the myth that the public sphere is a place unified by deliberation, we must affirm that there are some problems which are mutually and absolutely exclusive. They speak only of the nation, of the people, of sovereignty or national identity, of disintegration. We wish to speak about class, exploitation, violence, repression, domination, intersectionality. Thus, these are the two scenes, and one is mutually exclusive of the other. From this point of view, combating today’s discursive hegemony sometimes means remaining silent rather than being accomplices.

2. Principle of designation: to recognize individuals for what they really are, to no longer ratify their attempts at deception nor accept as valid subjects of debate those opinions which we know for a fact to be wrong. The alleged threats posed by migrants to the unity of France or Europe, the risks of gender theory, are not topics of discussion, these are insults and lies.

3. Principle of redistribution of shame: to transform the scene is to change the space of the speakable. The “silence of the intellectuals,” in the end, is not the problem. The problem is who speaks and who remains silent. There are the individuals who we would prefer to remain silent, not by force, as we will surely be accused of advocating, but, on the contrary, by making them understand that their remarks are worthy of nothing but contempt. The ideologues of the extreme right can think what they want, the main thing is that they do not dare say it without incurring disrepute. “The civilization of morals” referred to by Norbert Elias is not the total disappearance of the ugliest thoughts, it is a society where those who wish to formulate them are led to control their impulses.

4. Principle of intervention: as often as possible, to intervene, to occupy space. In short, to bring the left to life.

Geoffroy de Lagasnerie is a French philosopher, sociologist, and professor at the École Nationale Supérieure d’Arts de Paris-Cergy. He is the author of several books, articles pertaining to social and political philosophy, epistemology and critical theory, including The Last Lesson of Michel Foucault: On Neoliberalism, Theory and Politics (Fayard, 2012) and The Art of the Revolt: Snowden, Assange, Manning (Fayard, 2015).

Edouard Louis is a French writer. He is the author of the autobiographical novel Finishing Off Eddy Bellegueule, which was published in France by Editions du Seuil in 2014 and has been translated into 20 languages. 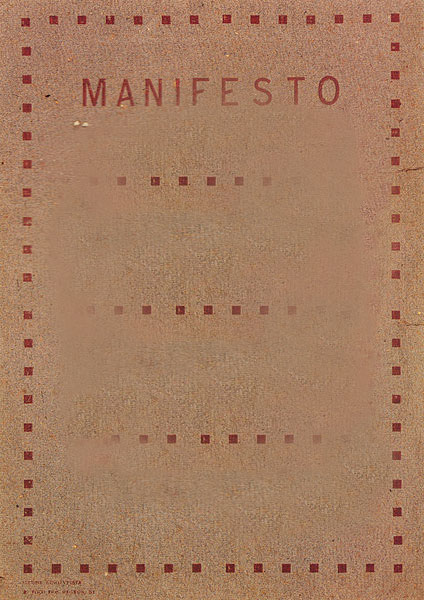 Manifesto for an Intellectual and Political Counteroffensive