DON’T BE FOOLED by the title of D. Foy’s novel — no fathers were killed in the making of this book, at least not in the usual sense. Patricide is a story of collateral damage. Foy has written a father (and mother) and son tale for our time, in a lyrical and philosophical mode that makes this old story new.

Foy has a prose style that matches his subject matter — it shakes and rattles the reader, switching from first to third person and jumping around in chronology. Yet neither of these techniques diminishes the effectiveness of the story. The tale of a white, lower-middle-class family at odds with itself, Patricide takes place during the 1980s, in the American West. The father is inept, stoned, and abusive through neglect when he isn’t overtly violent. The mother has no love for her husband but is also quite capable of brandishing her own violence toward her children. The protagonist, eldest son Pat Rice, is the main recipient of the harm his family dishes out. On top of his parents’ abuse, Pat also has a mentally ill brother who launches the occasional homicidal attack. This is a war story and how one may or may not survive it.

Euripides wrote that noble fathers have noble children, so let us assume for the sake of this novel that the inverse is also true. Pat is a prodigy at observing and mimicking many of the less desirable traits of his parents. The son realizes his father is an enigma but not before realizing he himself is also a riddle. Pat lives the blueprint of the troubled adolescent: he falls prey to addiction, runs away from home, suffers myriad forms of abuse, and descends into depression. Like some street-punk philosopher, he begins to examine his life to discover why. The process is treacherous. To learn from your mistakes, you must first commit them. As he observes:

It’s as if all your life you’ve been sorting through a box of pictures, randomly choosing this or that, only to see your ignorance of their meaning in the scope. And yet in this oblivion, you’re reminded spookily, not just that the person in the image is “you” but that until now, you — the “you” who peers with wonder into the image, eldritch as a face in the lake — have forgotten the moment and the experience of which it was a part.

No one said self-discovery was easy, and Pat’s trek toward self-empathy and a truce with his family and the world is a major trial.

This is not a romantic narrative of self-destruction. Foy’s straightforward scenes are deceptive — each one focused and precise, yet leaving the reader reeling on to the next painful episode. Yet Patricide is not a depressing tale of poverty and degradation. While it doesn’t have a tidy ending or a neat moral, it left me pondering on a number of levels, about my life and the lives of others. What might I be today if I had had a boyhood such as Pat Rice’s, what might I feel about my parents?

Wayward relationships with parents are often about anger, and books that tackle this theme usually have crucial turning points when this rage explodes. Pat reaches that point one New Year’s Day, when he has had enough. In the midst of a knockdown fight, he takes his father by the throat and curses him with “poison words.” “The whole of my life’s rage,” he writes, “had been distilled to this time.” A role reversal commences:

I had changed.
My father had not.
I was the angry man, now.

When Pat’s fury subsides, other emotions take over. “The pleasure I felt in that moment of power was matched only by my horror at my father’s paralysis beneath me, and by my disappointment and my sorrow.” And so begins a series of processes and cycles — from “rage to censor, censor to need, need to hope, hope to clarity, and on again to panic, to sadness, to anger, hatred, rage.”

Patricide is a logical extension of Foy’s first book, Made To Break (2014), in which a gaggle of fringe characters gather in a remote cabin on New Year’s Eve to celebrate a friend’s transition from her bohemian existence to a corporate job. The occasion is a symbolic funeral of sorts, and — like the family in Patricide — the characters struggle with each other as inclement weather enforces an artificial togetherness. Contrary personalities collide, and unrealized emotions boil over. This is a topic Foy clearly knows well. His characters are people you know or maybe wish you didn’t. Pat Rice at least manages to survive and come to grips with his youthful confusion and rage. In a letter to his father, he writes, “In all the years, I can recall but a few times in which you have simply said ‘I am sorry.’ Rather (and it hadn’t dawned on me until now that this has been the pattern), you say ‘I am sorry you feel that way son.”

Acknowledgment is what Pat seeks — confirmation that he wasn’t a rebel without a cause. Pat searches for answers in order to clear a path for his future. He realizes that his father is a coward and has little hope of being redeemed. For all his dysfunctional upbringing, Pat learns that he wants what all of us want — simply to be recognized. Foy deploys Thomas Hobbes’s purported saying: “Hell is truth seen too late.”

Foy draws the reader into his drama. You want to yell at the son for being an asshole or the mother and father for being equally impaired. They will not heed, of course; as Foy shows, they can only continue to unravel in their own ways, at their own pace, to what one hopes will be an abiding if unsteady truce. Patricide is an unnerving but rewarding read.

David Breithaupt has written for The Nervous Breakdown, The Rumpus, Exquisite Corpse, and others. 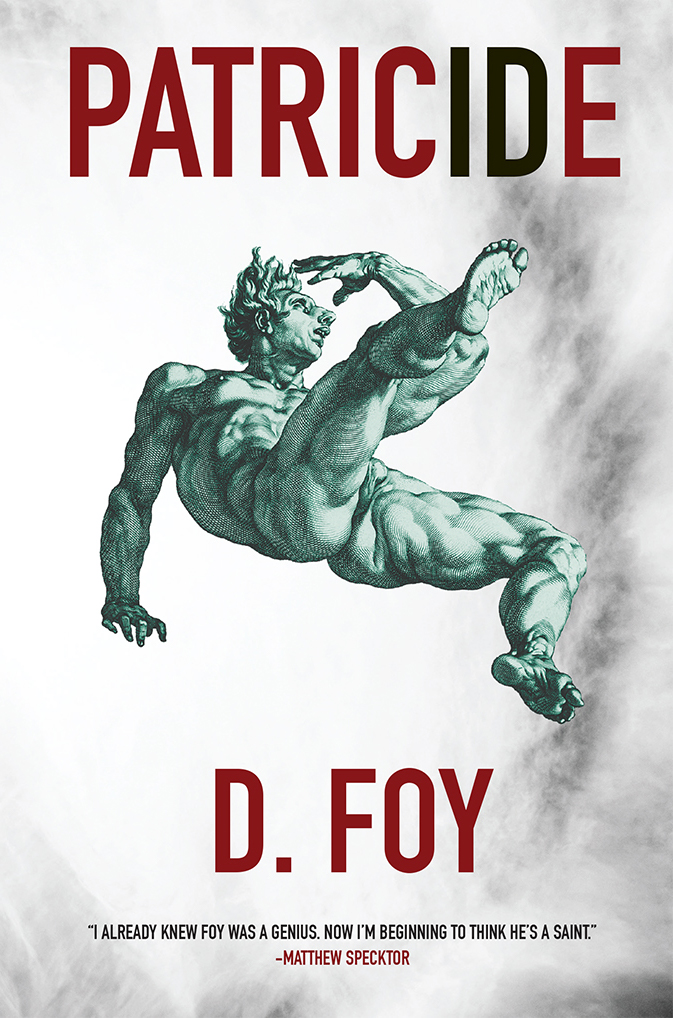