JAMES ELLROY’S Perfidia is the literary version of dinner at one of my favorite spots, the venerable Van Nuys institution Hoppe’s Old Heidelberg. Tipping in at over 700 pages, Ellroy’s book is heavy fare, not so much tasty as filling, not the best, just good enough. If it isn’t always satisfying, at least you won’t be left wanting more.

Quasi-historical fiction, Perfidia is also an exploration of Pearl Harbor’s impact on the home front, and the loosely leashed violence and martial spirit which continues to be part of our national character.

Sure, Ellroy gets some things wrong (Paul Robeson did not go to Princeton), sometimes unforgivably so (LA County Sheriff Eugene Biscailuz was no racist). But it is all told in Ellroy’s often exciting, sometimes exacerbating rat-a-tat-tat style:

The book boasts a cast that only seems like thousands. The six pages of Dramatis Personae at the end include real-life characters ranging from LA Mayor Fletcher Bowron, Bob Hope, the Roosevelts, and Dragnet star Jack Webb, to name but a few. There are also characters from Ellroy’s previous books, a nifty form of creative bootstrapping. These include Ed Satterlee, Lee Blanchard, Buzz Meeks, and a slew of other corrupt cops, crooks, and whores from Ellroy’s LA Quartet: The Black Dahlia, The Big Nowhere, L.A. Confidential, and White Jazz. You need a program to follow the players; giving them numbers too might have helped.

Like the best of his previous works, Perfidia is most entertaining as pitch-black noir. Ellroy stuffs more dead bodies and bad women in one book than in all of Raymond Chandler’s books combined. And it begins, as always, with a horrible murder.

Then it gets darker and more horrible.

On December 6, 1941, the slaughtered bodies of the Watanabe family are found in their home in what appears to be a ritualistic murder-suicide. Among those called to the scene are the deliciously vile Dudley Smith, the ambitious, corruptible alcoholic William H. Parker (the real-life future LAPD police chief), and the innocent Hideo Ashida, a Nisei American and LAPD chemist.

A tortured conniver and conflicted Catholic, Parker sees the case as one more way to enhance his position in the Department, and he is willing to use whatever illegitimate means necessary to gain the appearance of legitimate power. As part of his irresistible rise, Parker ultimately co-opts the beautiful, ennui-filled Kay Lake to infiltrate a Communist cell of Hollywood writers and liberal activists in order to spy on Parker’s enemies inside and outside the LAPD.

In contrast, Dudley Smith seeks to contain the fallout from the Watanabe murders in order to consolidate his control of the City’s vast, illegitimate interests, many of them operating out of opium dens in Chinatown, the offices of studio heads and politicians, and various real estate and farming agencies.

There are no real heroes in Ellroy’s books, no flawed Marlowes to avenge the dead; Ellroy’s world is too toxic for justice to survive. The brilliant scientist Ashida is as close as one gets. He pursues the Watanabe case in the face of racial hatred and the brutal manipulations and countermoves of Parker. But Ellroy can’t ever quite bring himself to make the good believable.

Ashida is inexplicably ignorant of the obvious motivations of those around him and unbelievably blind to the forces driving his own behavior. One of the book’s more important characters, he is also its least plausible or interesting one.

Similarly, Kay Lake is less a three-dimensional character than a DC Comics, Roy Lichtenstein frame of pop art. Her presence in the story is told primarily through the clunky device of a diary whose excerpts are full of cliché and hooey, as obvious as Ben-Day dots.

This diary is a broadside against stasis and unrest. I have always felt superior to my surroundings. This house states the case most tellingly. I picked out every German Expressionist print and every stick of blond-wood furniture. I’m a prairie girl from Sioux Falls, South Dakota — and a gifted arriviste.

And Lake is no more real when the narrative turns to the third person.

Parker said, “You’re going to infiltrate a Hollywood Fifth Column cell. They’re wholly seditious and deserve to be crushed … They will smear our country and my police force with huge strokes of Red paint. They will toe the Communist Party line and attempt to further the designs of Soviet Russia, once the Allies have won this war, as we inevitably will, and global Communist encroachment emerges as the chief threat to our internal security and the safety of the free world.”

Kay Lake said, “It’s a mad and presumptuous undertaking. It’s as questionable as you consider it to be certain.”

Villains and victims are what Ellroy does best. Dot Rothstein, the bull-dyke prison matron, and Elizabeth Short, future Black Dahlia murder victim, appearing here for a surprise cameo, are more fully realized (and more intriguing) than the cardboard cutout that is Kay Lake.

Fortunately, Dudley Smith remains the most compelling, complex demon to burn through an American fiction since Cormac McCarthy’s Judge Holden took scalps in Blood Meridian. An inspired, wholly original creation, Smith is always the star of an Ellroy book. Armed with a badge, blackjack, gun, Irish charm and brogue, and sociopath’s sense of right and wrong, Smith is charmingly, unforgettably evil. If Smith were the only character Ellroy ever created, Ellroy’s greatness as a writer would be complete.

But Ellroy refuses to let well enough alone. In Perfidia, he gives us Smith’s whole life story, beginning in Ireland, with romantic stops involving Joseph Kennedy and Bette Davis. But in making the implicit explicit, Ellroy demystifies his own creation, leaving Smith less interesting than he was before. Cormac McCarthy was wise enough to never explain who or what Judge Holden was, leaving it to the reader’s imagination to fill the void. Legends and nightmares are sui generis, with nothing so prosaic as a backstory. In telling us who Smith is and where he came from, Ellroy waters down his greatest work. Sometimes writers are their own worst enemies.

Perfidia is the first novel of the Second LA Quartet, which will cover the characters and time between 1946 and 1972. I’ve read everything Ellroy’s produced and will no doubt read the future books. I have also interviewed and reviewed Ellroy several times over the years, and even made the mistake of suggesting that the good members of the staid Jonathan Club Library Committee invite him to their 106-year-old bastion of conservative ideals to do a reading of Blood’s a Rover.

My mother, then the head of the committee, has still not forgiven me.

I should have known better from personal experience. In July 1990, the night before taking the California State Bar examination, instead of studying, I went to see James Ellroy do a reading at a local Berkeley bookstore (Pegasus, I believe). A large man with a booming voice and a tendency to howl, he chose to share with the audience what amounted to the most vulgar and obscene sections of his then newest book (L.A. Confidential) despite (more likely because of) the proximity of children’s reading section of the store. I can still see terrified parents grabbing their kids and fleeing the monster at the mic, which only seemed to encourage Ellroy to talk louder and faster, his too small, too-close-together eyes following them out of the store with the look and smile of a maniac.

Afterward, Ellroy was generous enough to chat with me about my plan to become a prosecutor. “Call me Big Dog,” he barked. He then signed the only book I had on me, a one volume Bar/Bri Examination Review Book, which I still own.

“To the next Ellis Loew,” he wrote. “Let it hang long and low, James Ellroy.”

Loew, as Ellroy students know, is the crooked Jewish prosecutor in several Ellroy novels and the “it,” Ellroy explained, was retro-hipster speak for my penis (lest I didn’t know). He then howled.

The man can act like a dope. His books are bloated. But, God help me, when I’m in the mood for a big, heavy serving of LA crime, he’s the best we’ve got. There is no accounting for taste. I am a fan. His earliest works (Blood on the Moon, Because the Night, Suicide Hill) were better written, plotted, and paced. But even when he’s just okay, Ellroy never leaves you hungry.

Jonathan Shapiro is a television writer and producer. 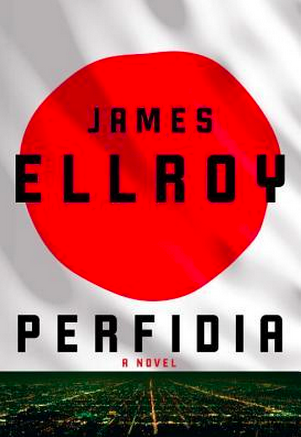