DAVID RITZ’S new biography of Aretha Franklin, Respect, is not the book Franklin wanted written. The Queen of Soul already published the book she wanted, From These Roots, which Ritz himself ghostwrote in the late 1990s and which Franklin’s booking agent compares to “one long press release.” That profoundly idealized account of Franklin’s life left Ritz with an archive of unpublished material that at last finds expression in Respect. Ritz is careful to state that his version of the singer’s life is but a version. But it is the richest record of her friends’ and family’s words that we are likely to get.

People in any way touched by celebrity always have a story to tell about it, but Franklin’s witnesses are an exceptionally incisive group. As ghostwriter to the stars of American music, Ritz knows how to assemble these voices; and, in the mode of Atlantic Records producer Jerry Wexler, to whom he dedicates this book, he also knows to stay out of their way. Respect consequently reads like a series of inner-circle conversations held at the barbershop, beauty salon, or kitchen table. We hear from Franklin’s gospel mentor Reverend James Cleveland, her sisters Carolyn and Erma and brothers Cecil and Vaughn, Jerry Wexler, booking agent Ruth Bowen, musical peers Billy Preston, Etta James, Ray Charles, Carmen McRae, and Luther Vandross. The commentary of her siblings is especially brilliant, as when Erma compares the Franklin sisters’ relative degrees of talent to the Jackson 5, or Cecil describes Aretha’s ability to sing jazz, blues, and gospel with equal facility: “In the language of the jazzman, that’s what’s called a motherfucker.” When these siblings’ voices drop out of the narrative in the years of their deaths (Carolyn in 1988, Cecil in 1989, Erma and half-brother Vaughn in 2002), the loss is palpable.

The voice we don’t hear — in addition to those of Franklin’s partners and sons — is the singer’s own. Presumably since Franklin has already told her side of her story, Ritz privileges other voices, which tend to undermine Franklin’s version of events or note that many of her plans never materialize. That pattern grows tiresome. But at the same time, Ritz presents a clearer picture not only of Franklin’s delusions but also of her grandeur than she could have presented herself. Artistic genius might be better assessed by the outsiders it affects than by the person who possesses and is possessed by it.

Here’s what the outsiders have to say: Franklin consistently idealizes her life to the point of releasing — the year one of her homes burns down and two of her siblings die — an album called So Damn Happy. Petty and competitive, she gets mad when Atlantic signs another female soul singer, Roberta Flack; when Natalie Cole successfully records material that Franklin passes on recording herself; and when Beyoncé introduces Tina Turner as “the queen” when everyone should know there’s only one. Some of her diva antics are hilarious, as when she shows up longtime rival Barbra Streisand by singing “Funny Girl” in front of her at the1969 Grammy’s, and asks that the members of Oprah’s studio audience wear gowns and tuxedos to honor her appearance on the show. Some career moves are ruthless, as when she insists on recording an album of songs, Sparkle, which Curtis Mayfield has promised to her sister Carolyn. She is both meaner and more socially committed than one might expect: Ritz highlights her tireless service to Martin Luther King’s freedom movement, her public support for Angela Davis, her plan for an unrealized conference that would “deal with how the Black woman specifically and Black people in general are treated around the world,” and her appearance at a high-profile same-sex marriage in 2011.

Above all and appropriately, Respect depicts Franklin as an ambitious musical genius whose career is her “essential relationship.” As a child she seems exceptional even in a world of gospel wonder-children, to which she arrives as if from a “distant musical planet.” “Here’s how it worked,” her brother Cecil explains, “Aretha heard a song once and played it back immediately, note for note. If it was an instrumental, she duplicated it perfectly. If it was a vocal, she duplicated it just as perfectly. She got all the inflections right […] Her ear was infallible.” She used that infallible ear to arrange many of her own greatest hits, from “Chain of Fools” to “Natural Woman,” writing piano lines, background harmonies, and drum breaks. Yet it is not until Amazing Grace, her live-at-church 1972 brainchild, that she receives producer credit.

Few aspects of popular music history are so unyielding as the tendency to locate influence and innovation solely in the work of male artists. It is therefore surprising, although it shouldn’t be, to learn that Ray Charles’s recording of “Lucky Old Sun,” and Otis Redding’s version of “Try a Little Tenderness” were both inspired by Franklin’s recordings of those songs; that she overdubs her main vocal lines with her own harmonies seven years before Marvin Gaye makes that technique famous on What’s Going On; that Eric Clapton was once too intimidated to play guitar with her; that her 1967 recording of Otis Redding’s “Respect” set the template for socially conscious and commercially viable soul music for years to come; that Gaye was profoundly validated when she sang his “Wholy Holy” on Amazing Grace — the album with which, moreover, Franklin helped to “invent modern gospel.”

She may not say much in conversation, but she is “a musician who talks through music,” as James Cleveland states. (Her spoken introduction to “Angel” admits as much: there she explains that Carolyn, the song’s composer, called her up with “something that I want to say” and decided that “rather than go through a long-drawn-out thing,” she would let the song speak for her.) If Franklin’s singing seems to “[channel] more emotion than one human being could bear,” her art is also her lifeline: “She transform[s] her extreme pain to extreme beauty,” Erma Franklin says, “That’s my sister’s gift.” She is also a consummate listener, drawing Thelonious Monk’s harmonic inventions, Astrud Gilberto’s bossa nova style, and post-disco beats into her work; in this sense her records reflect not only sublimated pain but also a lifetime of listening.

Her trust in the music, along with her indefatigable optimism, has carried Franklin through seven decades in the music industry — from Columbia to Arista to her own label Aretha’s Records, from LPs to mp3s, from gospel to soul to post-disco, pop, and opera. She reportedly believes that every next song will be her biggest hit, that if her fifties were a good decade, her sixties should be better. Whether or not she is right, Ruth Bowen notes that “what it comes down to is this: no one can tell Aretha shit.”

Toward the end of the book, Ritz states what is incontestable: “The survival of Aretha’s career, both artistically and commercially, [is] […] nothing short of remarkable.” But so is the survival of Aretha herself. Since the 1960s she has moved through a valley of losses — Otis Redding, Sam Cooke, Martin Luther King, her father, all her siblings, Luther Vandross, Jerry Wexler, Michael Jackson, Whitney Houston — with a reasonable reluctance to speak about pain and an unreasonable capacity to endure it. Not to mention that, as Billy Preston states, “On any given night, when that lady sits down at the piano and gets her body and soul all over some righteous song, she’ll scare the shit out of you. And you’ll know […] that she’s still the best fuckin’ singer this fucked up country has ever produced.”

Emily J. Lordi is an assistant professor of English at the University of Massachusetts, Amherst.

Respect: The Life of Aretha Franklin 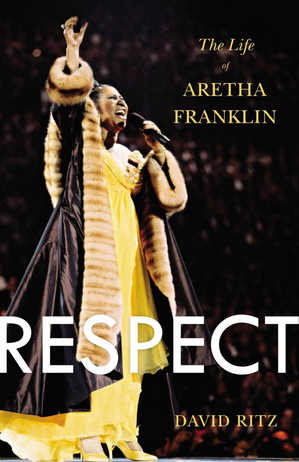