IT HAS BEEN a long time since anyone has written a great book about spaceflight. Tom Wolfe, at his bombastic peak, captured the exuberant optimism of the first Americans to orbit the moon in his 1979 masterpiece The Right Stuff. Nine years earlier, a series of dispatches Norman Mailer wrote about the Apollo 11 mission for Life magazine were collected in Of a Fire on the Moon, an idiosyncratic tour de force in which Mailer confesses to a “simple masculine envy” of the men who would perform our first moon landing.

If literary journalists since have felt that envy, it has not stirred many to write books about Americans in space. Conspicuously absent from the national canon of space writing, such as it is, has been a book that addressed itself to the age of the space shuttle, the longest and most prolific era of American spaceflight. Unveiled in 1976 with the promise that it would be “cheaper, safer, more routine […] more like commercial air travel” — like an airplane, it could land on wheels attached to its belly — the space shuttle has long been an under-appreciated marvel.

Which is why Margaret Lazarus Dean’s Leaving Orbit, a deft and lyrical meditation on the last days of the space shuttle program, is a book we need. Dean has been thinking about spaceflight for a long time: she recalls childhood weekends wandering Washington, DC’s National Air and Space Museum with her mathematician father. In 1985, she watched the IMAX documentary The Dream Is Alive, which records the astronaut Judith Resnik, “her dark curly hair floating about her” in the empty cockpit of Space Shuttle Discovery as she sleeps. Dean’s 2007 novel, The Time It Takes to Fall, was set in Cape Canaveral after the 1986 Challenger disaster, which killed Resnik along with six others. For the children who watched the shuttle break apart, Dean writes, the destruction of the Challenger “permanently damaged our faith that the world made sense and that the adults were properly in charge of it.” A decade and a half later, following another high-profile disaster — the disintegration of the Space Shuttle Columbia in February 2003 — NASA’s accident review board recommended the termination of the space shuttle program. Dean was moved to document what may have been the last three flights of NASA crafts into space, ending with the final landing of Space Shuttle Atlantis, in July of 2011.

Like Wolfe and Mailer before her, Dean is fascinated by astronauts and their outsized personalities. In the authors’ green room at the Southern Festival of Books, she spends an hour with the “cartoonishly handsome,” nearly 80-year-old Buzz Aldrin, whose fame as the second man to walk on the moon has been partially eclipsed by his terrestrial accomplishments, including rapping with Snoop Dogg and appearing in advertisements for Omega watches, Louis Vuitton luggage, and Krug champagne. Anyone who might begrudge Aldrin these easy paydays should know that he was paid just $33 for his moon voyage, and that for the past forty-five years, he’s been asked versions of the same question — how it felt to walk on the moon — almost every day. Dean overhears him tell one autograph seeker, “When we got back, we sort of felt we’d missed out on the whole thing.” He must also engage with moon hoax conspiracists, sometimes physically: a viral 2009 YouTube video captures Aldrin punching a heckler in the face.

But marquee names like Aldrin are not the focus of Leaving Orbit. Dean discovers some of her richest material in the outer orbits of the (now collapsed) space economy. On her five trips to Kennedy Space Center — to watch the final launches of Discovery, Endeavor, and Atlantis; the landing of Atlantis; and a failed launch of a SpaceX craft — she watches members of the closeout crew, “whose responsibilities include strapping the crew violently into their seats one by one.” She engages “harried but extremely competent” press officers, and observes janitors roll “trolleys emblazoned with old mission patch stickers.” She chats with a young clerk at the Merritt Island Clarion Hotel and a jocular photojournalist who sweats through his shirt on a bus to watch the last Atlantis landing, mordantly joking, “This sucks! I’m never coming to one of these again!”

Dean herself spends a lot of time in her car, driving twelve hours from her home in Tennessee to Cape Canaveral, and then usually right back again — so much so that Leaving Orbit has a plausible claim to be judged as this year’s best travel book about the southeast. It helps that Dean is alert to the contrast between the matchless sophistication of our shuttles and the ancient menace of the alligators and mosquitoes that patrol the land and water around America’s “swampy, improbable spaceport,” whose “incidental preservation is one of the many strange gifts of spaceflight.” Leaving Orbit would be a lesser book if Dean had spared her readers the launch day lock jam traffic on State Road 3, the “swampy mildew smell” of her hotel in Orlando, or the “different shades of waiting, flavors of waiting, moods of waiting” detectable in the hours before a launch:

Buddhists might appreciate the way each launch wait brings about in spectators a different quality of boredom, then acceptance, then calm, then something like a childlike openness, an ability to take in the sight we are about to see with minds wiped clear of desire, warped of time.

Dean gains access to the Kennedy Space Center thanks to Omar Izquierdo, an orbiter integrity clerk — his central duty is to stand guard by Discovery — who writes to her in 2007 to point out a minor error in her novel. A long correspondence leads to an invitation to participate in a NASA “Family Day.” Omar takes Dean on a tour of the 525-foot-high Vehicle Assembly building and the Launch Control building, its lobby decorated with the mission patches of 149 spaceflights, including the last flights of Challenger and Columbia. These, she observes, are missing landing dates: “The blank spaces on the wall where those landing dates should have been are discolored from the touch of people’s hands […] launch controllers, managers, and engineers who have been touching these empty spaces with their hands, on their way to and from doing their jobs.”

Omar turns out to be not only a guide through the labyrinth of the Kennedy Space Center, but also, uncannily, a counterpart to the heroine of Dean’s novel, who, like Omar, grew up around shuttle launches, trailing a NASA engineer father. Omar and his father Francisco, who joined NASA at the inception of the shuttle program after graduating from engineering school in Puerto Rico, become the emotional fulcrum of Dean’s book. Their years of labor in the service of spaceflight have made them, if anything, more awestruck about the business of sending human beings into space. Dean asks Francisco how many space shuttle launches he has seen; he “pauses modestly for a moment” before answering that he has seen “all of them” — a total of 154 at that point.

It’s through these men that we feel most acutely what it means that, as Dean puts it, “we have been flying American spacecraft in space for fifty years and now have decided to stop.” Omar, who’s taking computer science classes in the hope that he’ll qualify for another job in the aerospace industry, shows up at an employee appreciation party that NASA hosts the afternoon of Atlantis’s final landing. Dean describes it as a “wake with ice cream, in hundred-degree heat, a party where most of the partygoers know they are about to be laid off.” Many of these workers have nowhere to go; certainly it seems unlikely that the private sector will absorb them. SpaceX, one of the private companies with which NASA has partnered in the new, post-shuttle era, doesn’t hold much promise for long-time space workers, who, Dean reports, are being overlooked because “the company doesn’t want workers who have been steeped in NASA culture” — a culture perceived as having a retrograde “extreme concern for safety.” Omar himself ends up working in the badge office of the Orlando airport.

Though she admires Gwynne Shotwell, the “whip smart” president of SpaceX, Dean herself is skeptical about the new era of privatized spaceflight. “[G]etting to space as cheaply as possible with an emphasis on catering to paying customers only serves to rob spaceflight of the things I most love about it,” she writes, fretting that “the type of big, grand, daring spaceflight projects I’m interested in are, by definition, not good investments.” With private companies controlling spaceflight, she fears we’ll lose access to “everything — images, films, discoveries, crew chatter” that NASA has always made public. And if space travel becomes a “privilege of the incredibly wealthy,” children may no longer dream of becoming astronauts, losing “motivation to do their algebra homework or serve in the military, knowing that their only hope of earning a seat lies in getting rich.”

Still, she holds out hope that “the end of the shuttle will be like the meteor that killed the dinosaurs,” opening new possibilities for spaceflight. Perhaps a visionary investor will even see fit ­— as NASA never did — to invite a writer on a lunar mission. (One hopes that Dean would be on the short list.) Until then, this thoughtful elegy for an abandoned future will have to suffice.

Michael Rymer is a contributor to The Village Voice. He teaches writing at the City University of New York.

Leaving Orbit: Notes from the Last Days of American Spaceflight 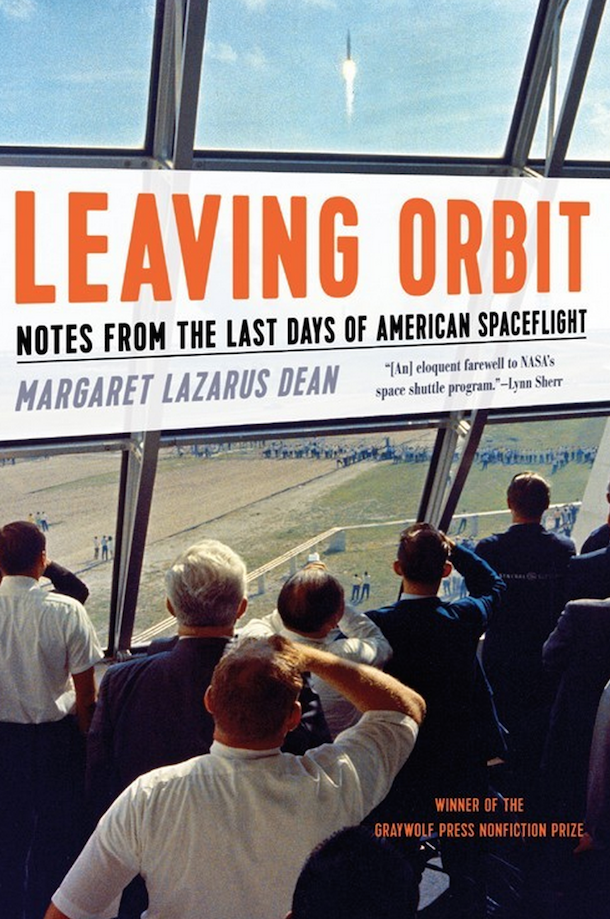