HOLLYWOOD FICTION is almost as old as the industry itself. It tends, like the broader genre of Los Angeles fiction, toward the dystopian, showing hopeful worlds gone wrong and mad (Horace McCoy’s They Shoot Horses, Don’t They? and I Should Have Stayed Home), or worlds that live on the cusp of mob hysteria and riot (Nathanael West’s The Day of the Locust), or worlds that oscillate between ennui and apocalypse (Joan Didion’s Play It As It Lays). Myron Brinig’s The Flutter of an Eyelid, a novel saturated with dreams gone sour, actually has the city breaking off and sliding into the Pacific. Such is the wishful thinking of the writer who comes here and gets fucked over, as writers almost inevitably do. Fiction that celebrates the processes of the dream factory, or even takes a knowledgeable look at it, is rare indeed. But here comes Matthew Specktor’s American Dream Machine, a big and generous novel that functions both as elegy for a recent past and fictional anthropology. It tells the story of Beau Rosenwald, short, fat, and profane, a striver from the East who lands in Los Angeles in 1962.

Beau’s father sells shoes, and Beau himself is a rube who hasn’t even graduated from college. The extent of his education has come at the hands of a mentor who advised him to read Coriolanus, a play of which Beau had of course never heard, on the grounds that “the story of one bloodbath can prepare you for the next.” Beau is an agent, a job that can remain a dark mystery even for those who seem to have packs of them in their lives, a job that Beau understands intuitively:

It turned out that Beau had a knack for it, for the long-form seduction it often took to represent someone. The trick was to find men as desperate as you were and when, like Beau, you’d been desperate since infancy, they were easy enough to recognize.

Beau’s first client is an actor:

The man’s eyes were a little too close together. His teeth were faintly rodentine, and his face telegraphed an anxious skepticism, like he was scanning the horizon against an imminent calamity. Still, handsome. Authentic.

Those details (the actor’s eyes, simmering with unease and paranoia, those “rodentine” teeth) recall the rich specificity of Saul Bellow, and from the above description I’m guessing that Specktor fully intends his audience to picture Bruce Dern. American Dream Machine at least toys with the idea of roman à clef, laying out a tale in which Jack Nicholson, say, or Lew Wasserman, Richard LaGravenese, or Danny DeVito occupy the page with some who are in merely thin disguise and others who are fictional, full-cloth. The novel’s mingling of these different levels of reality is part of its effect and power, creating a relaxed tone and nonetheless reminding us that gossip and hearsay and smudged reports are modes of story too, as valid as, if different to, the eyewitness account — all are part of history’s first draft.

American Dream Machine charts changing America through changing Los Angeles, and, more closely, through the changing parameters of the talent agency business, as it evolves from a “Mad Men” environment, in which a prized office object is a huge spittoon (a gift from Laurence Olivier), into a corporate world populated by “sleek Ivy-Leaguers” and “manicured UCLA grads” who ply their trade from towering offices that look like glassy tombs.

Central to this metamorphosis is the American Dream Machine of the title, a new agency (and here Specktor clearly takes CAA as his model) that comes to be created in the late 1970s by Beau and a few of his colleagues. The circumstances are comically small and clandestine — the rebels sneak out with files, and “hidden stashes of Hershey’s bars, of tea and cocaine” — but the consequences will be seismic, and not just for the individuals involved. Impossible shedloads of dough duly accrue; Beau endures unspeakable loss, and, somewhere along the line, he sees the vitality go out of making movies just as surely as if drained by a vampire. Still, he can’t stop. The deal, the negotiation, the unstoppable itch to assert himself and put one over: these are what make him a Hollywood Willy Loman, and a figure whose destiny deliciously mingles the absurd and the tragic. Against a broad sweep of cultural history, Beau’s career rises, falls, rises again, falls again, his decline driven both by an urge toward self-destruction commensurate to his ambition and a series of betrayals that stab home at close quarters.

Unlike the dog-eat-dog world of Budd Schulberg’s Sammy Glick, Beau’s world is cool and labyrinthine; its schemers and plotters, such as his protégé Emily White and his Princeton-educated partner Williams Farquarsen III (Specktor has a knack for names), are complex, their arcs are unpredictable, like characters from Balzac or Henry James:

American Dream Machine is told in the first person by Nate, Beau’s bastard son, who interweaves episodes of Beau’s career with the story of his and his half-brothers’ youth, coming-of-age, and early adulthood. Cue, therefore, party scenes, club scenes, scenes with drugs, and Gun N’ Roses. These episodes, for me, don’t work as well as those that center upon Beau and his cohorts. La vie de bohème is basically the same in New York or London or wherever you look, whereas the business world that this novel inhabits is unique, opaque, and therefore utterly fascinating.

However, Specktor’s Jamesian or Gatsby-ish narrative strategy allows the story to blast and breeze across the decades with conversational intimacy:

How thrilling it must have been. The fat kid from Queens, loosed into a world like this one. Can you blame me for wanting to crowd in before my time, to wanting to jam into a booth at Dominic’s, at the Factory or the Haunted House, next to Beau and Bryce and Nicholson and Bob Skoblow, the man who’d booked the Beatles onto Ed Sullivan.

Nate’s tale is, too, a meditation about fathers and sons, about both the love, and the fantasies of rebellion and love, that exist between them. It’s a laying to rest of a past that Nate can’t help but be haunted by. Glory days, gory days. This is a novel that calculates the sadness of time, taking as central to its action the frightening idea that, as the world changes, so do our roles within it. Even scheming Iago will get to play Pagliacci and, if he lives long enough, King Lear. Beau’s end is spectacular and sad indeed, a fittingly outrageous Götterdämmerung amidst the weird Spanish voodoo of the Chateau Marmont.

Specktor is very good on scenes in rooms, intimate struggles whether they be sexual, familial, or professional. “Why didn’t she just flat-out say no? Because studio heads never had to.” Power understands that silence is no, and to be on the other side of that silence is impotence indeed. American Dream Machine is about men and women (but mostly men) who, if they see a toe, can’t resist the urge to tread on it.

Most Hollywood novels are written by outsiders. Even The Last Tycoon, narrated by an insider, Cecilia Brady, the daughter of a studio head, was of course written by F. Scott Fitzgerald, endlessly and tragically fascinated by an industry that condemned him to be never more than a kid with his nose pressed against the cold glass of the window. It’s no secret that Matthew Specktor has been a movie executive, was and is a screenwriter, and is the son of Fred Specktor, the legendary CAA agent who (no kidding) I once glimpsed being given both a manicure and a pedicure while simultaneously working several phones to close a deal for his client Jeremy Irons. (Full disclosure: Specktor is also a founding editor of the Los Angeles Review of Books.) Which is not to say that Beau is Fred (I’m sure he isn’t), but that Specktor knows a thing or two about these fabulous monsters and the waters through which they frolic and shark.

American Dream Machine is written with a great ear for a sentence and a funny line (“You think it’s easier to sell actors than shoes?”). More importantly, it evokes a world with casual ease and unexpected tenderness, recalling and referencing lots of other fiction (both Hollywood and non) while contriving to establish its own unique authority. 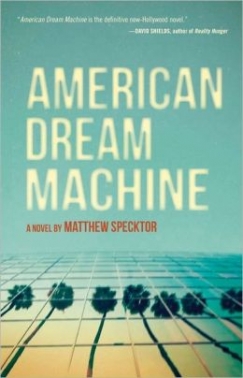