MY LIFE IS FUNDAMENTALLY ABSURD: this is a line that engraved itself on my mind after reading Jane Jeong Trenka’s 2005 memoir, The Language of Blood, some years ago. The book documents Trenka’s experiences growing up racially isolated and culturally confused as the ethnically Korean adopted child of Caucasian-American parents in the Midwest. As someone who is half-Indian and half-American, with one foot on each continent, I found Trenka’s descriptions of geographical displacement to be particularly apt. One can try — as she did — to weave together the disparate strands of an ethnically haphazard existence, creating meaning out of a scattered life. But even at the heart of such a patchworked narrative, a fundamental, beautiful absurdity remains. How unlikely is this life that wraps itself all the way across the globe? How many extraordinary contingencies were required for a single life to unfold as it did? The result of storytelling such as Trenka’s is not a neat and tidy narrative, but rather an unsettlement of boundaries — a blossoming of meanings that together make a strange emergent sense.

I was reminded of Trenka’s words while reading Ayya’s Accounts: A Ledger of Hope in Modern India, a wonderful collaborative effort between a grandson and grandfather, anthropologist Anand Pandian and retired fruit merchant M. P. Mariappan (“Ayya”). The book is partly the story of Mariappan’s life, and partly a cross-generational conversation. Pandian has woven interviews with his grandfather into a story in two voices, alternating between Ayya’s individual narrative and Pandian’s own attempts to place his family’s history within the larger arc of India in the 20th century. As such, the book manages to be something quite a bit more than memoir or biography. Pandian has taken the microcosm of his grandfather’s long life, spanning Burma, India, and the United States across the 20th century, and used that grain of sand as a lens through which to view the world of India and its tumultuous history over the past hundred years.

The result is the story of a village boy turned merchant and entrepreneur that has its parallel across thousands of other lives. “Why pay such close attention to the life of someone so ordinary, so unknown?” Pandian asks. The book provides one potential answer: that a single life provides a window onto a multitude of others. Like many Tamilian families, Ayya’s family extended in the early 20th century not across what is conventionally defined as India today, but rather across zones of Southeast Asia now crisscrossed by national boundaries. “We live in an era that takes national borders as sacred boundaries,” says Pandian, “as if simply crossing over is an act replete with peril and potential.” The life of a single wandering individual can allow us to call into question the boundaries through which we divvy up the world. Where a grand historical narrative might lack the finesse to show the porous, shifting nature of borders, the life of one ordinary person might easily slip through the cracks.

When Ayya made the journey from South India to join his father at his Burmese shop as a teenager, the voyage was a politically unremarkable one. “Because Burma and India were both ruled by the same government,” he says, “we didn’t need a passport, or visa, or any such documents to go there.” The way back to Tamil Nadu was not nearly so simple, however. After 10 years as a merchant in Burma, Ayya was forced to flee with the rest of his family as the Japanese invaded during World War II. Here, the way back to India would not have been eased by either passport or visa, still irrelevant in the chaos of war. Pandian recounts his grandfather’s tales of the arduous journey circling the Bay of Bengal on foot, crossing mountains plagued by cholera and malaria where thousands of other refugees died on the way. Ayya’s journeys outside India were progressively retold over the years, and then repeated in practice by children and grandchildren who grew up and dispersed across the world. These travels came full circle when Ayya’s American-born grandson Pandian traveled with him to visit Burma once again, searching after 70 years for the gravestone of Ayya’s father. There, they met relatives who had returned to Burma decades before, settling down and creating a hybrid Tamil-Burmese identity.

At the heart of Ayya’s Accounts there is a fairly basic question, which arises not from the Indian storyteller grandfather, but rather from the American anthropologist grandson. “What could I have been, if anything at all,” asks Pandian, “had Ayya’s life taken some other turn?” The question is one that any individual could ask, looking back at a family history filled with chance meetings and narrow escapes from violence. It carries extra weight, however, given the migratory turmoil of the 20th century. We live in the era of the geographically confused, searching for clues to our own identities in the traces of ancestral journeys. Pandian’s story does not resolve such confusion; it merely gives shape to it, tethering Ayya’s life within the larger story of the Indian subcontinent and its diaspora. Ayya’s youth in an impoverished family in rural Tamil Nadu in the 1920s becomes not just the story of an individual in Pandian’s hands, but rather a window onto an entire historical tapestry.

But what is this world that we see here, refracted through the life of one man? A strange one, where borders of identity dissolve, and new defining lines emerge. Ayya claims, for instance, that when India gained independence in 1947, he did not learn of the fact for 10 full days. The changing price of fruits was news to him. Changes in political power were not. Likewise, he was unaware of the Great Depression except as fluctuations in the price of onions. In retrospect we can tie the financial uncertainties that Ayya experienced to global events, but for him they had no such meaning. His childhood, likewise, can seem in hindsight peppered with tragedy, born of poverty and caste discrimination, but what emerges is instead a story of resilience. His schooling was abruptly curtailed at the age of 13, but not before Ayya was able to cultivate a mathematical agility that aided him through an entire life as a merchant, tallying up debts, investments, and profits.

For Ayya, supporting a family of eight children on his earnings, the world is a shifting progression of numbers and calculations. Even in his old age, he busies his mind by counting his steps on his daily walks, in order to stave off the distraction of surfacing memories. Pandian speaks of his surprise when Ayya first encounters the majesty of a California redwood, and his response is to exclaim in astonishment that the trees could be sold for millions of rupees. Shift perspective slightly, and the entire world changes: from tree to timber, from natural beauty to profit, from one national identity to another, moving between the past and the present.

Somewhat appropriately, I read Ayya’s Accounts over the course of a long journey: traveling from New York City to New Delhi. I found a curious doubling of vision while reading of Pandian’s multiple trips between India and the United States, of his family’s improbable existence and divided identities. The trip by air between India and the United States, which can span days (at the cheapest fares), has become for me emblematic of the beautiful absurdity in the life of the South Asian diaspora. I am sure that there must be towns on this planet that do not have migrants from the Indian subcontinent, but I have not yet found them. That massive network of displaced people begins with this kind of journey, by land or air or sea, one that dismantles borders of space and time in its wake.

As I wandered the airport train station in New York, I found a food stall advertising samosas alongside chicken nuggets. With a head full of Ayya’s journey and my upcoming two days of air travel to Delhi, I gravitated toward the stall. I asked the man behind the counter if he was from India, and was met with a delighted outpouring of words in return. The samosa-seller was from Hyderabad, homesick, and more than ready to talk about it. His story overflowed while I purchased enough Indian-American-Italian sandwiches to sustain my husband and myself for the next few hours. He had no family in the United States, and had not been back to India in five years. Selling to customers at the airport — I imagine this must have been torture. All the money that the man saved he sent back to his family in Hyderabad, so that his daughter could get a good education and eventually a job as a software engineer.

Here is Ayya’s story, reflected across decades and continents: one individual, displaced across the globe by winds of finances and chance. And within that life, once again, the microcosm of a swiftly changing planet.

Anjali Vaidya is a PhD student at the University of California, Irvine. She has written in the past for Tehelka and The Caravan. 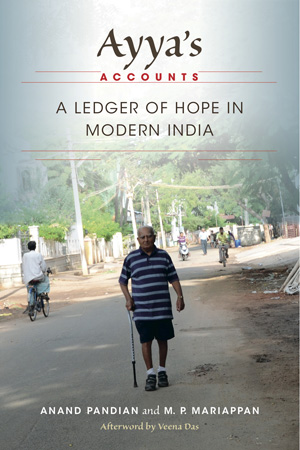 The Era of the Geographically Confused