ON SEPTEMBER 12, US Secretary of Education Betsy DeVos announced what amounted to a plan to dismantle the public education system. American schools, she explained, suffer from a “mundane malaise” that denies children a future and leaves them “stuck in the 1800s using a model courtesy of Prussia,” but the days of students sitting in desks, in brick and mortar schools, with school boards and the like, are coming to an end, shortly to be replaced by market-based solutions such as vouchers and charter schools.

In Democracy’s Schools: The Rise of Public Education in America, Johann N. Neem defends the American public school system by recovering the ideals of its founders. The book provides a compelling account of how Horace Mann, Reverend William Ellery Channing, Catharine Beecher, and other antebellum advocates of the United States’s common schools brought what amounts to a liberal arts education to the nation’s children. In the face of widespread cynicism about public education, Neem reminds us that public schools can liberate children’s minds from prejudice or vocational preoccupations.

But this book may be too late. The federal government has increased its power over local schools in the last 50 years and pushed a “college and career ready” agenda that is at odds with the liberal arts. Democrats may be the last, best friend of “the system,” but they must confront the fact that it is hard to defend public education in its current configuration.

Neem is himself a product of a public school education. His family emigrated from Mumbai, India, to the San Francisco Bay Area when he was a child, and he recalls warmly the day that the teacher and students handed him a signed card after his swearing in ceremony to become a US citizen. Public schools, Neem affirms, “prepare all young people to take part in the shared life of our democracy” and “democratize access to the kind of liberal education that was once reserved for the few.”

The hero of his book is arguably the Whig politician Horace Mann, Secretary of the Massachusetts State Board of Education, and so-called father of the Common Schools movement. Mann traveled to Prussia in 1843, and in 1852 he helped Massachusetts adopt the principles of the Prussian education system.

On Neem’s account, Mann was a tireless advocate for democratizing the liberal arts and making it possible for most children to have the kind of education that was traditionally offered only to children of the elites. Mann and other reformers wanted public schools to “develop the potential of each human being” and “orient young people to higher purposes.” A society that trains children strictly for “the workshop or the field,” Mann believed, “will be disrobed of many of its choicest beauties.”

Ordinary citizens sometimes opposed education reform on the grounds that common sense and real-world experience would prepare most children for life’s challenges. Others, however, argued that reformers had an agenda that would destroy the democratic tenor of American life. Mann’s critic Orestes Brownson observed that nearly everyone on the Massachusetts Board of Education was a Whig and a Unitarian. For Brownson, Democrats and Baptists were right to be wary of a public education system that emanated from “despotic Prussia” rather than the democratic United States. Brownson was following in the footsteps of Thomas Jefferson and other early small-d democrats who wanted families and ordinary citizens, rather than bureaucrats, to control the local schools.

To his credit, Neem refuses to take sides in these early conflicts between systemic reformers and participatory democrats. On the one hand, Neem sympathizes with the reformers who thought that all American public schools should provide an education for democracy — that is, that schools should impart the skills and content necessary for children to eventually perform their role as citizens. For these top-down reformers, the state has the power and the responsibility to make democratic citizens.

But Neem gives a fair hearing to the democrats who maintain that schools should provide children an education in democracy — that is, raise them in an environment where parents, neighbors, and local educators make crucial decisions about how to raise the next generation. For these democrats, public schools must transform our country from the bottom-up, infusing democratic norms in the schools and then the rest of society.

Neem argues that the tension between the two sides — reflected in today’s argument — made education a “central issue in American politics,” and that is how it should be in a democracy.

Like Neem, I had, on the whole, a positive experience in public school. I still think often of a fourth grade teacher who asked me to play the role of Doctor Dolittle in the school play, as well as a high school librarian who often recommended the right books for me to read at the right time. If I have become an education activist in the past few years, it is mostly to protect children, but also to protect the kinds of teachers who inspire children to be their best.

But my enthusiasm for public education has waned. The Every Student Succeeds Act requires annual testing of students in grades three through eight and once in high school in English Language Arts and mathematics, and states around the country have or are planning to administer these tests on computers. Though the Every Student Succeeds Act does not specify what standards qualify as “college and career standards,” most states use some version of the Common Core. Public education around the country now means preparing for or taking online Common Core tests. This seems like a dystopia to my wife and me.

Our family has begun to home school this year so that our children can grow and learn at their own pace and so that they may do many hands on activities. In teaching our children, we follow Jean Piaget’s theory of childhood development, Maria Montessori’s pedagogy of placing children in situations where they can concentrate on completing a task, and John Dewey’s principle that education should harness a child’s interest to motivate intense study. We teach our children to read, write, and do math, of course, but we tailor the curriculum to each child in a way that is contrary to the Common Core’s expectations that all children should meet the same performance expectations at the same time.

I believe Neem and I want the same general kind of education for our children. I will continue to fight for sensible education policies and against the school choice agenda advanced by Republicans and Democrats alike. But I do not have much energy to defend the public education system as it currently exists. By entrusting distant professionals rather than local citizens to run the schools, Mann and subsequent reformers must take some responsibility for weakening popular support for public education.

Democracy’s Schools ends with a benign-sounding call to defend American public schools in whatever form they take: “We should watch over them, and reform them when they fail us. But we also depend on them. We cannot evade our responsibilities to and for them and, by extension, each other.”

The problem with this conclusion, however, is that much has transpired in public education since its formation in the antebellum period. In 1965, President Lyndon Johnson signed the Elementary and Secondary Education Act assigning the federal government a larger role in public education. Each subsequent reauthorization of the law, including the No Child Left Behind Act of 2001, has ramped up federal intervention in the school system, and the Every Student Succeeds Act of 2015 requires that “all students in America be taught to high academic standards that will prepare them to succeed in college and careers.” Betsy DeVos, notably, has less interest in challenging standards-based education reform than she does in changing how public education is delivered.

Education reformers such as DeVos aren’t much different from their 19th-century counterparts — they still claim to have a plan to give all children a liberal arts education that has hitherto only been available at the finest private schools. One such reformer is David Coleman, the lead writer of the Common Core English Language Arts standards and presently the head of the College Board. According to a portrait in The Atlantic, he is “an utterly romantic believer in the power of the traditional liberal arts.” On this account, the Common Core will revolutionize education by making it possible for all children to read humanity’s greatest works of literature and nonfiction.

But the bloom is off the Common Core rose. Few people of any party actually believe that it has democratized a liberal arts education. According to one critic, it is “whittling away the democratic and human purposes of education,” claiming to prepare children for college and career, but failing to promote citizenship or learning as a good for its own sake. The Common Core has confirmed democrats’ fear that the state is primarily interested in training workers and subjects, not energetic citizens.

The critic in the above paragraph is Johann Neem. He knows that economic and political elites are transforming public education to serve their own needs. According to Neem, democrats need to defend public education at the same time as they seek to revive its founding ideals. He makes this clear in a recent op-ed: “The Founding Fathers saw freedom as the cornerstone of the nation and public schools as essential vehicles to secure it. Guided by their vision, we should work to fix America’s public schools, not abandon them.”

The Rise of Public Education in America 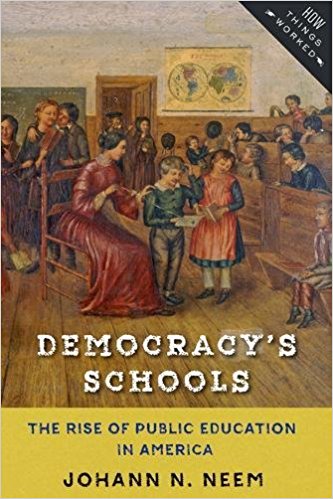