THE DEVELOPERS OF Beirut’s Eden Bay needed to clean up the raw sewage on the beach of their luxury development, so they rerouted it into a storm pipe. “And then the rains came,” writes Lina Mounzer in her darkly comedic account from the new anthology Tales of Two Planets: Stories of Climate Change and Inequality in a Divided World.

The deluge burst “so forcefully up from the depths that the sewer covers danced atop the flumes, like in a cartoon. Yes, Eden Bay, and all its enablers, had caused a literal shitstorm.” The problem of waste disposal recurs throughout this internationally sourced collection of short stories, essays, and poems. There are the “flying toilets” of the Nairobi slums, where, without proper facilities, desperate rural migrants must “shit in a plastic bag and throw it as far away as possible.” There are murky lakes crusted with scum and garbage that nevertheless serve as swimming holes. There are dead bodies dumped in rivers laced with cyanide and bromine from nearby factories.

Most of us never have to think about this unpleasantness. The collective anus of the well-off is expertly linked to hidden culverts that route our waste into faraway lakes and rivers and neighborhoods and cities and nations and cultures — places inhabited by people whose worries about climate change and pollution are a function not of op-eds and melting Arctic ice but withering crops and evaporating water sources, for whom the only escape is to leave the only life and land they know for a city with plastic bags for toilets.

Injustice is another of the collection’s recurring themes, which sits uneasily with the frequently invoked notion of climate change as divine punishment. Climate change may be a moral lesson, but the deity responsible for it inexplicably visits suffering upon those who are least responsible. Corrupt officials do not end up marinating in the sewage they’ve been bribed to divert. The countries first to drown in our rising oceans have done the least to deserve their fate. “You’re again reminded of Thai Buddhist cosmology: the underworld you were told of as a child, where the sinful are made to endure a boiling in copper cauldrons,” muses Pitchaya Sudbanthad as she chokes on the bitter soup that passes for air in Bangkok. “What have you done to deserve this punishment? What has anyone done but be reborn into this age?”

True to the anthology’s title, these tales paint a picture of a world divided, but there are also hints about how to unite. I was struck, for instance, by a strand of conservatism running through the pain of those most deeply affected by poverty, environmental devastation, and climate change. Their traumas are not merely the physiological traumas of hunger and sickness, which, deceptively, take up the entire foundation of Maslow’s famous hierarchy of needs. Missing from that foundation are existential needs like sense of place, identity, community, and religion.

“[I]n the center of the sierra the greatest concern is that young Rarámuri who migrate change their ideas about traditional culture,” explains Diego Enrique Osorno of an indigenous group living in the south of Mexico who are watching their community erode.

Other authors join Osorno in describing the existential threat posed to ancient lifeways by global inequalities. Just like rapid changes to an ecosystem can traumatize the landscape and its living inhabitants, rapid changes to a cultural ecosystem can traumatize the people it sustains. I came to see how conservation and conservatism, divided politically, come from the same spiritual root, giving me hope that we can unite people with disparate values around the shared intuition that destroying ancient systems is deeply tragic, and should not be undertaken merely for the sake of luxury condominiums.

There are a few weaker moments of oversimplification — a strained dystopian short story about quantification run amok; a heavy-handed poem that fails to reveal anything about Trump by saying “swastikas are his aura” — but far more often the authors highlight complicated truths. Take, for example, this astonishing passage in an essay by Anuradha Roy about how government officials in India twist climate change to their own ends. “Nowadays everyone says things are ruined because of climate change,” complains Mr. Negi, a villager whom Roy meets on a train from Delhi to the Himalayan foothills.

Isn’t it convenient for governments like ours to have climate change to blame? It is so big, it’s international, it’s everyone’s fault — yours, mine, America’s, China’s. And that’s worked like a dream, hasn’t it, for our ministers? Drought? It’s because of climate change. Floods? Climate change. Scorching summers? Climate change. What about the things our governments have done? […] An invisible web of plutocrats and corporations controls the ruling regime as well as its rivals. There is resignation, cynicism, and fury as government after government ravages the country’s forests and waters in a tight embrace with giant companies. No one can reverse this or stop it: it has been and will be coitus uninterruptus continuous until there is nothing left to destroy.

Even in this and other tales of top-down corporate manipulation and government malfeasance, I also saw hope. After all, aren’t these universal villains? Can we not rise up, together, to protest the pillaging of our ecosystems and cultural systems for the sake of a few? It began to dawn on me, reading story after story of corruption, that perhaps the ideological divisiveness and finger-pointing so familiar from debates about conservation and climate change in the United States — it’s your politics, your elitism, you are a religious nut, you are a tree-hugger — perhaps that serves the powerful interests floating in the ocean of our politics like an algal bloom, thriving as its surroundings become a dead zone.

In any case, does that kind of finger-pointing help, or is it like honking at a reckless driver in hopes of inspiring responsibility? Lauren Groff’s short story, “Dusk,” makes the question harder to answer with a protagonist whose inner monologue is surely as familiar to readers of this review as it is to me. Obsessed with the wastefulness of her neighbor’s inebriated online shopping sprees, the woman fumes, distraught and outraged:

Even though the end is nigh, I wanted to shout from my perch across the street, we don’t have to hasten it! I couldn’t stop thinking of the boxes, the trees slaughtered to make them, the trucks filling the highway carrying mostly paper and air and shit people didn’t need, that caravan of death, that burning of dead dinosaurs releasing carbon into the atmosphere, heating us up, how the marketplace that conservatives beheld in slavish adoration somehow came up with the most profound inefficiency known to mankind.

The inner monologue is eventually externalized; the neighbor does not undergo a conversion.

Even the finger-pointing at universal villains comes in for critique. Mariana Enriquez reflects on pollution in Argentina:

It’s often thought that pollution is the result of evil businessmen and evil politicians, a double entity that rubs its hands together and cackles. That is a soothing idea for a clear conscience, but it’s simplistic. The truth is that if there was never a consistent plan to control industry and slaughterhouses, it’s because Argentina never had a political balance that could enforce it.

Or take Sudbanthad again, tracing the sources of the Bangkok smoke she chokes on:

The fume clouds from cars and buses and scooters, but also the delicious clouds from skewered meats blackening on a clay charcoal grill, like the kind your grandmother used to cook; the pulpy smoke drifting across the pavement from where an old amah has squatted down to burn afterlife money to those gone; the gray wisp billowing out of a crematorium’s chimneys towering over the temple ground.

Tales of Two Planets is not soothing. It is not simple or stable, and it refuses easy pieties. You may struggle to make sense of the voices, to fit them into your own overarching narrative, and you will fail because there is no single narrative — these are tales, not a tale, and they force you to ask instead of answering, to continue asking, each tale an answer you’ve probably never heard. When writing can make you do that, at least for a moment, it’s another reason for hope.

Alan Levinovitz is associate professor of religious studies at James Madison University and the author most recently of Natural.

Stories of Climate Change and Inequality in a Divided World 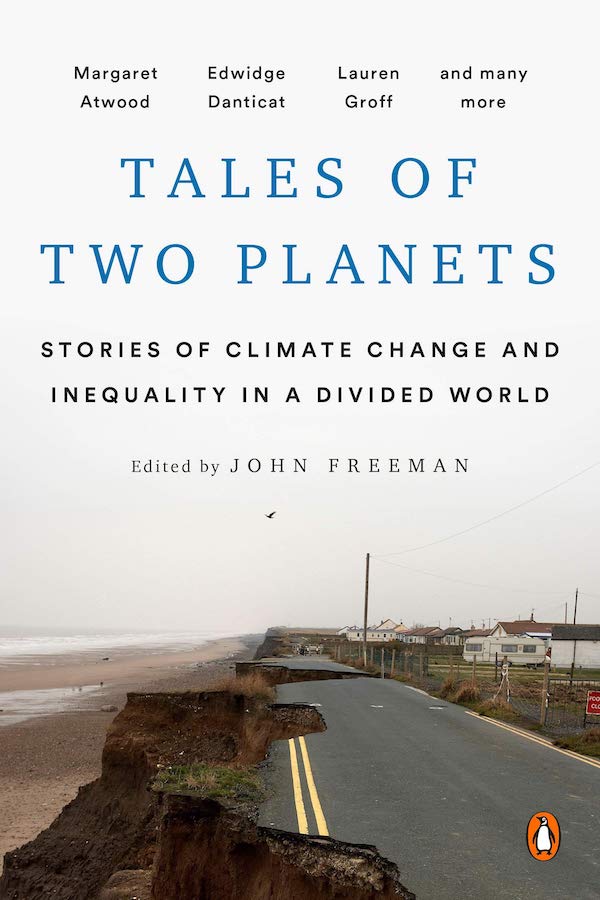