AFTER HIS FATHER’S DEATH in 2007, Marcos Giralt Torrente read sundry memoirs “for inspiration,” as he prepared to write Tiempo de vida, his award-winning book about personal loss and the final years of Juan Giralt’s life. His writing had stalled and he’d failed repeatedly to come up with new ideas. “I finally accepted that all I could write about was my father,” he states in the book’s opening section. That’s a common sentiment from memoirists who publish accounts of the deaths of loved ones. But Giralt Torrente was conflicted about how to go about his task. As a way to convey this mild vacillation, he provides a list of books about grief:

These are titles that might appear on the syllabus for a college course in the genre. They contain a range of human sorrow: fathers mourning sons; sons mourning mothers; parents mourning children; spouses mourning spouses. And they left the author more confused than before. In the end, he followed no advice but his own in writing Father and Son: A Lifetime, which was awarded the Spanish National Book Award in 2010, and is now available in English, in a translation by Natasha Wimmer.

We might as well admit it: we gravitate to memoirs by or about famous people. It should be noted therefore that Giralt Torrente’s father, Juan Giralt, was a notable artist and painter in Spain. His maternal grandfather was the highly respected Galician writer Gonzalo Torrente Ballester. (Giralt Torrente uses his grandfather’s name as a tribute to his mother.) It might also help to know that Giralt Torrente, in his mid-40s, is himself a successful writer of fiction, whose books have found their way to English translations. These include a collection of short stories, The End of Love, as well as Paris, a fine first novel in which a middle-aged narrator reflects on his upbringing and young adulthood with an often-absent father and a dutiful mother. That description might also summarize his memoir — however, in Father and Son, as indicated by its English subtitle, Giralt Torrente tells the real story of a lifetime with his father all the way to the end, interposing meditative sections in which he dissects and illuminates their relationship, with ruminations on art and writing.

This interspersion of narration with reflection is an effective structure for the book, because — fortunately for the family, but perhaps unfortunately for the reader — Torrente’s home life, though quasi-Bohemian, was on the whole quite normal. The author is skilled enough to render an ordinary life engaging, and the quotidian is further buoyed by injections of writerly meditation. In fact, these are some of the strongest sections of the memoir; after all it was art that kept father and son connected throughout their up-and-down relationship. “There’s only one area […] in which there is no risk of conflict: I’m proud that he’s a painter; I admire his work,” Giralt Torrente writes. “Where it’s concerned, I’m always ready for a temporary truce.”

Truces came regularly. Giralt Torrente portrays his father and himself both as stoic, engaged in a long, tacit struggle that manifested in silent retreats and unspoken appeasements. It’s not that their relationship was tumultuous. They were, simply, not very intimate; that is, not until the very end of Juan Giralt’s life.

And yet Giralt Torrente wanted paternal closeness all along. In hindsight he confesses:

These are the longings of an artist’s offspring, but the underlying sentiment is a common desire of almost every son: to know that he matters to his father.

Giralt Torrente’s parents separated when he, their only child, was around 10 years old. Not long after, in adolescence, his relationship with Juan Giralt became strained due to the minimal paternal role his father assumed for long stretches, his father’s preoccupation with his relationship with his second wife, and his inability to provide adequate financial support during midcareer struggles. Even so, and in spite of a litany of complaints, the reader never gets the sense that the author is settling scores. Giralt Torrente’s grievances are not unusual for children of divorced parents, and if he is frank about his father’s foibles, he’s also honest about his own. “The past is the only thing that seems fixed, and we tend to mythicize it,” he writes. “It gives us something to rebel against or reconcile with. Parents may or may not serve the same purpose, and for that reason alone they are sources of conflict.” Overall, however, he portrays both parents in a favorable light, directing his anger and resentment instead at Juan Giralt’s second wife, whom he refers to as the friend he met in Brazil. Though she and Juan Giralt spent two decades together, we never learn her real name nor much else about her; we know only that she abandoned Juan Giralt at the end of his life. This final betrayal is what leads Giralt Torrente to become his father’s primary caregiver during his two-year battle with cancer. However unkind, his stepmother’s desertion is the act that enables father and son to “close the circle,” as described in translation; that is, to finally reconcile and draw near.

Even so, Giralt Torrente informs the reader that he has no interest in deeply exploring her role in the story. His memoir, he states, is “a book about two people” — his father and himself. The women in their lives — his mother, his own wife (the girl in red lipstick), and the friend he met in Brazil — inhabit an emotional periphery, which is his authorial prerogative, except that the stepmother is too crucial to the narrative to be the one-dimensional figure she is in these pages. To leave out her motivations in this way calls further attention to his resentment; whereas to investigate those motivations might have shored up an important aspect of the narrative and provided the reader with a fuller explanation.

Father and Son: A Lifetime is otherwise an artful memoir. At the end of the book, Giralt Torrente returns to his reading list with the understanding that the cited authors matter to their subjects only as much they come to believe that.

All the books I’ve been reading, no matter what drives them, whether it be filial devotion, the urge for revenge, remorse, or mere literary ambition, simply confirm this fact.

Our troubles aren’t exclusive to us. To a greater or lesser degree and in one way or another, everyone has faced them.

And most of us, at one point or another, have wanted to resolve them once and for all

Though some — just a few — do it only to say yet again: I was right.

Not so much, Giralt Torrente. “And there we were,” he writes about the years that father and son spent in silent proximity to one another in Madrid,

each the mirror of the other, practitioners of similar careers, connected by the telephone line. Watching each other from afar, sometimes in anger, sometimes in the hopes of reconciliation, sometimes in a precarious state of bliss. There we were, the two of us: he in his studio listening to music while he struggled with a painting, and I in my apartment struggling against myself as I listened to music.

In “Captives,” a story from The End of Love, a dying character attempts to hire the narrator, a struggling writer, to pen his biography. But the offer comes with a caveat. “If you accept the job, limit yourself, please, to being a chronicler. Do not interfere.” For the most part, Giralt Torrente does just that in Father and Son: he chronicles; he documents. He reflects and explores as well — but only to a point — to create a memoir that is not about grief alone. At the outset, in acknowledgement of his ambivalence, he writes, “An elegiac portrait of my father wouldn’t have been true to my feelings.” But in a roundabout way that is what he created: a reserved and affecting elegy, not only in tribute to Juan Giralt, but in honor of the bond between father and son.

Father and Son: A Lifetime 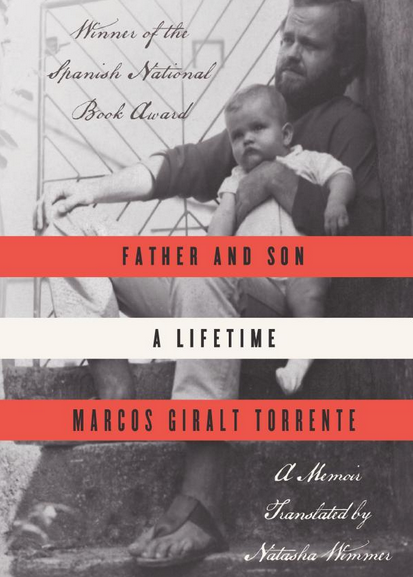