WHEN I TAUGHT ancient and medieval Western civilization, at the end of the class I used to tell my undergraduate students that, for all the genius we had surveyed, if someone were to approach them with a time machine and ask what year they would like to live in, they should say, “This one, please.”

The slightest engagement with history teaches us that life is better for (almost) everyone today than it was for even the most privileged in the past. Jonah Goldberg’s Suicide of the West joins a growing library of modernity boosterism by Matt Ridley, Steven Pinker, and others, which seeks to convince us of our own good fortune.

Unlike Pinker’s The Better Angels of Our Nature (2011), however, Goldberg’s is a jeremiad, a genre with a very old history, as the name indicates. As good as things are, he suggests, they are also tenuous. Goldberg thinks we are in danger of losing many of the benefits we have painstakingly accrued, that we have gone seriously off the ideological rails. The Western world has been captured by a tribal romanticism and is neither grateful for its blessings nor concerned with how to sustain them.

Goldberg covers a lot of ground, and the weight of his argument sometimes sags under the ancillary. He wants to explain “the miracle” — the astonishing increase in living standards and freedom in the past few centuries. He offers quick summaries of the birth of capitalism, the English and American revolutions, the foundations of liberty, and everything from the explosion of government regulation to current speech codes on campus, trends in film and music, and the economic woes of Venezuela. One can nitpick about the potted histories (for example, I believe he doesn’t acknowledge the enormous contribution of Hebrew Scriptures and Jewish thought to the founding of America or of capitalism), and there is some assassination by anecdote. Granted, his wry retelling of campus blaming, shaming, and victim claiming would shock all but the most ideologically besotted. But is the atmosphere better outside of the college campus? Are communities left or right more tolerant than students? Having attended my share of conferences, rallies, conventions, religious services, and public events, I am not at all convinced that campuses are unique in this regard. And if the attitudes there are more extreme, is that a surprise? Tolerance is painless to the indifferent and wrenching to the passionate. Youth specializes in passion.

That said, the details add up to a powerful indictment. Goldberg’s larger argument runs roughly as follows: human nature is not an overflow of goodness, but a mix of selfishness, altruism, distrust of the other, and the capacity to be civilized. Therefore, how we train ourselves and our children, how we learn to discipline our emotions, how we esteem the individual even when different from us, is critical to the democratic experiment. And we are trivializing and emoting our way to chaos. All the talk of feelings and identity, the exaltation of emotion over reason, corrodes the healthy body politic with a toxic species of group-solidarity. What’s the alternative? A return to core, conservative values.

is a bundle of ideological commitments: limited government, natural rights, the importance of traditional values, patriotism, gratitude, etc. But underneath all of that are two bedrock assumptions upon which all of these commitments stand: the belief that ideas matter and that character matters.

At first glance, the assertion that ideas and character matter is denied by no one. But a mild assent is not enough. “[T]he cure for what ails us is dogma. The only solution to our woes is for the West to re-embrace the core ideas that made the Miracle possible, not just as a set of policies, but as a tribal attachment, a dogmatic commitment.” Assent is anodyne; we need devotion.

Goldberg attributes our ailment to a combination of causes: exhilarated with our identities and experiences, we slight the rationalism and individualism upon which America — and the West — was founded. Reasoned discourse falls before “as a (fill in the blank), I feel”; the subgroup you belong to has come to matter more than what you think. This way, argues Goldberg, lies balkanized chaos. We must return to our traditional roots.

John Locke in particular receives a long encomium. Goldberg explains why he, and not Rousseau, is America’s guiding spirit: “Locke believed in the sovereignty of the individual and that we are ‘captains of ourselves.’ Rousseau argues that the group was more important than the individual and the ‘general will’ was superior to the solitary conscience.”

It is dangerous to enlist intellectual history in service of modern agendas. The story of mind is capacious, and condemnations should be specific. One could as easily point to the transcendentalists as America’s guiding spirits, and surely Whitman, Thoreau, and Emerson (and Lincoln, for that matter) could justly be described as romantics, or at least romantic adjacent. And while Goldberg continually extols the individual over the group, and identifies the group with romantic ideology, it is hardly clear that romanticism cannot be as individualistic a doctrine as reason. Reason is general; feelings are individual. The romantic hero was a solitary one. “Self-reliance” was Emerson’s essay, not Locke’s. That romanticism has lent itself to totalitarian ideologies is inarguable. But to prove that a militant tribalism is essentially a problem of romantic ideology would require a much longer book than this already long one.

Furthermore, Goldberg seems to be aware of the baleful social effects of the headphone-wearing, Netflix-binging, food-delivery-ordering loner whose needs are increasingly fulfilled by a series of screens. In a techno-geeking world, individualism easily slides into solipsism. Is that any more desirable than romantic tribalism?

Goldberg certainly has a bone to pick with new technology. He complains of the ability of mass entertainment, music, movies, and TV to seduce us into immorality. Sure, Breaking Bad may have us falling in love with an increasingly savage Walter White, but Goldberg’s is a very old complaint, and hardly unique to new media. Recall that Plato wanted to ban poets from the Republic, and William Blake acutely commented that Milton, having made Satan by far the most vivid character in Paradise Lost, “was of the devil’s party without knowing it.” Diversions of the young have always seemed pernicious to the old. One can almost hear Goldberg shaking his head and muttering, pipe in hand, “Kids today…”

Indeed, there is much to dispute in this crowded book, but Goldberg is an expert shot and modern America is a target-rich environment. Polarization is greater than at any time in recent memory (and most of the book was written before the election of Donald Trump). Public depredations that would once seem unthinkable are routinely overlooked. As family and voluntary associations crumble, political divisions take on the coloration of religious commitments, passionate and exclusionary. Government does increasingly reach into every corner of our lives. The history of the West is far too often seen only through the prism of its crimes (which are, of course, heinous), rather than its unprecedented achievements. And we are undoubtedly victims of the skill with which we entertain ourselves. On all these issues, Goldberg’s analysis is acute, informative, and important.

His prescription, however, seems inadequate to the complexity of the problem. Is it really enough for us to become more appreciative and disciplined? Can we really turn on a dime? The same technological warp drive that has given us iPhones and streaming services has cut extreme global poverty in half. The same tsunami of data that has revolutionized medicine has, with a twist and a tweet, given us 24-hour news with its howling stridencies. We spit and get our genetic history, press a button and access all human knowledge, navigate the globe on a six-inch screen. In other words, we are in the midst of a tidal wave of change. A call for discipline and appreciation in the midst of such a maelstrom reminds one of St. Augustine’s encounter with the child who was trying to empty the sea with a spoon.

Perhaps no one can rise to the challenge of offering a prescription, but there is great value in diagnosis.

Suicide of the West has pointed to genuine problems: Jeremiah’s doom has been pronounced. Now we await the prophet who can explain how technology can aid our solidarity more than it destroys it.

David Wolpe is rabbi of Sinai Temple in Westwood. His most recent book is David: The Divided Heart (Yale University Press).

Suicide of the West

How the Rebirth of Tribalism, Populism, Nationalism, and Identity Politics is Destroying American Democracy 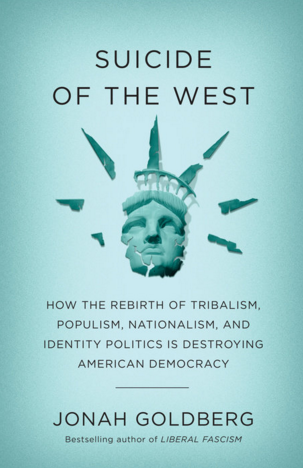