SHOULD YOU EVER stumble across the grave of Sylvia Plath, you will notice this epitaph etched on her tombstone: Even amidst fierce flame / the golden lotus can be planted. That line became a mantra for me during the pandemic lockdown, keeping alive a hope that something good, maybe even golden, might emerge from these weeks of numbness. I’m still waiting.

Iris Smyles had much better luck. She wrote a book of engaging, philosophical, and often funny short pieces titled Droll Tales (insert Balzac emoji). Smyles may have channeled the spirit of surrealist painter Leonora Carrington when she was writing these tales, which are infused with that artist’s outré brand of humor. Take, for example, the story “My Ex-Boyfriend,” which begins:

Yet, despite their echoes of Carrington (and Gertrude Stein), the stories seem to me uniquely Smyles’s own. If you have read Smyles’s previous books, Iris Has Free Time (2013) and Dating Tips for the Unemployed (2016), you will be happy to see that she is back in full force with this new volume.

In the lead story, “Medusa’s Garden,” an unnamed female narrator describes her early life as a ballet student and airline stewardess. Traveling across Europe, she discovers communities of living statues that seem to populate every major tourist destination — those who emulate such icons as the Statue of Liberty or the Medusa. This is it, she decides. Her new life, the calling that has been beckoning from her subconscious. She readily adapts to her new life, eventually meeting Albert, a fellow practitioner of stillness who becomes her lover and mentor. Satisfying as this new career might be, it leaves room to muse about her life: “It’s a sad thing to be a woman, I sometimes think, standing on my plinth, nearly naked and covered in silver paint. To hold onto the riches of youth, you’ve got to give up all that made you old, the whole map of how you got here. Your history for a face-lift.”

The story inhabits a what-if/what-could-have-been zone. What if I’d quit my accounting job to become a statue? After reading this story, I had to admit it’s a tempting proposition. But just because you are a statue doesn’t mean your journey in life is static.

The following story, “Contemporary Grammar,” is a genre buster: literature meets analytic cubism. It is told in 23 diagramed sentences. As Gertrude Stein once said, “I really do not know that anything has ever been more exciting than diagramming sentences.” So that settles that. Most of us probably haven’t diagramed a sentence since fifth grade, but Smyles gives us a good excuse to brush up. My favorite is sentence 17: “The silence of heartbreak is deafening.” How very true, any way you diagram it. This story is a perfect example of how Smyles views life through an alternate lens, serving us views from odd angles.

Continue reading and you will meet “The Two Jacobs, with an Introduction by a Third.” The two Jacobs are college students who appear to be rivals yet who are bound inextricably together, arranging their academic and social lives in direct relation to each other. They continue to evolve through the ensuing short pieces, with one Jacob even translating Mallarmé into Pig Latin.

In an introductory note, Smyles states three goals she had for her book. The first is to entertain, while the second is “to prompt that very particular stir, an exquisite, terrifying awareness — call it joy — that you are alive right now and that this moment is unique and will never be again.” The third goal is to “inspire thinking about literature and science that has made a study of joy, of humanity’s most fundamental paradox — that to live is to simultaneously die, and so loss is not an episode in our lives, but the very fabric that comprises it.” These are certainly lofty goals, and I found all the boxes checked. Smyles has planted her golden lotus, and it has borne fruit.

Droll Tales is the kind of book that transmits a joy the reader wants to pass on to another. Its drollery is infectious. Isn’t that why some of us read and write, to inspire and be inspired, to plant our own golden lotus? There may be some malcontent who claims otherwise, but Smyles responds with a quote from Victor Hugo: “Melancholy is the happiness of being sad.”

Droll Tales is an excellent book to see the pandemic off with. It helped catapult me back into the world. Iris Smyles’s book is, if I may paraphrase the great Elena Ferrante, a “necessary witchcraft.” Eye of newt not included.

David Breithaupt has written for The Nervous Breakdown, Rumpus, Exquisite Corpse, and others. He has worked as a bibliographic assistant to Allen Ginsberg, a newsstand checker for Rolling Stone, and a staff member to the great Brazenhead Bookstore in New York City. He currently works for two sports newspapers in Columbus, Ohio, covering the Cincinnati Reds and OSU collegiate sports. 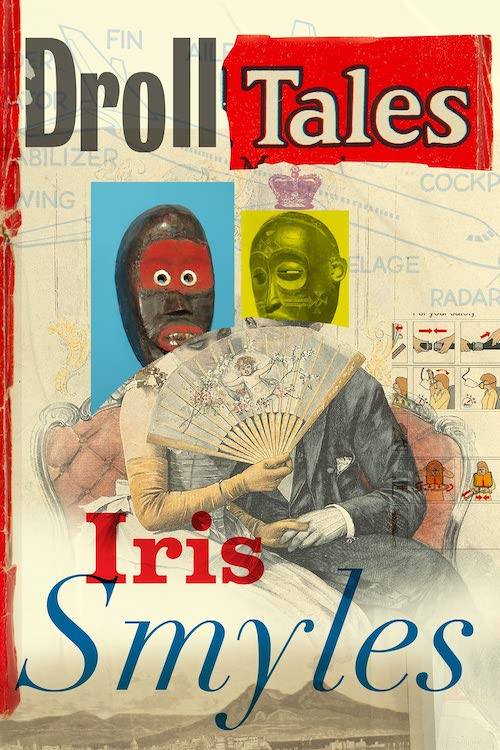