A RATHER UNFORTUNATE INCIDENT occurred in India in September 1657. The Mughal emperor of India, Shah Jahan — the man who commissioned the Taj Mahal — fell ill. He recovered soon enough, but the die was cast. Three of his sons, who were far away, suspecting that he had died, conspired, individually and together, to get the throne. Of these three sons, Aurangzeb, came to finally rule India in 1658. Shah Jahan’s favorite son, Dara Shukoh, who was with his father during his illness, and who had been pretty much declared the next emperor of India, did not make it to the throne. Supriya Gandhi’s book about Dara Shukoh is aptly titled The Emperor Who Never Was. The book is a picture of India of that time — a picture of emperors, princes, princesses, ascetics, mystics, poets, scholars, clerics, historians.

Dara Shukoh was defeated in battle by Aurangzeb, on a scorching day in June in Samugarh, a battle that Supriya Gandhi quite rightly describes as a “crucial battle in the subcontinent’s history.” India has had many battles that have shaped its history: Alexander got past Porus, Babur trounced Ibrahim Lodi, East India Company’s Robert Clive decimated the forces of Siraj-ud-daulah, Arthur Wellesley triumphed over Tipu Sultan. But no battle reverberates in India, even today, as the one at Samugarh. Its effects are too real to be driven into the sleepy corners of forgetful memory. Dara was on the run after the battle, and when finally captured, he was publicly humiliated and possibly beheaded. His severed head, as a dubious story relates, was shown to Shah Jahan.

Yet Dara has lived on. There is a never-ending fascination about him: for a prince who never came to rule India, he has got more attention than many actual emperors have. Gandhi’s account of Dara Shukoh shows why. Dara stood out, even among the talented Mughals. He may not have possessed the magnificent writing skills of Babur, the first Mughal. Nor did he have the flowing aesthetic sense of Jahangir, his grandfather (not that Dara was too far behind in his aesthetic abilities). But Dara more than made up with his intense interest in mysticism. He didn’t have much interest in the common piety that religion often enforces, but wanted to experience the ultimate truth that lay behind this common piety. And he did have remarkable experiences.

So great was Dara’s thirst to experience the ultimate reality that, once, while he had gone to meet a Sufi mystic named Miyan Mir, he stooped to pick up and eat the chewed cloves that had been spat out by Mir and were lying scattered on the ground. This softened the rather gruff Miyan Mir; he found Dara to be a willing and able disciple. Mughal emperors were deeply attracted to Sufis and other ascetics. Jahangir, for instance, had visited and recorded his conversations with the Hindu ascetic, Chidrup. The holy man lived in a smallish cave and it is remarkable that Jahangir visited him rather than commanding him to come to court. Gandhi has delightfully careful descriptions of Mughal paintings in her book, and there is one about the painting devoted to the famous meeting between the emperor and Chidrup.

The mystical spirit of India was made richer by the Sufis’ presence. Sufism is a spiritual quest within Islam that embodied the experience of God as a beloved with the aim of losing one’s self in God. The influence of the Sufis has been great, from Baghdad to Bosnia and from Mughal India to modern Turkey. Famous poets like Rumi and Farid-al-din Attar, and great theologians, philosophers, and scholars embarked on the Sufi quest. In India, the Sufis wrote about the philosophies and religious practices extant there; Yogic practices were found to be particularly useful in Sufism, and Dara Shukoh appears to have been no stranger to such practices. As he got closer to religious ecstasy — supported by many unusual dreams — he also began to cross the dividing line between Islam and other religions. Dara studied every religious book available to him: Hindu, Christian, and Jewish. He met and conversed with the religious leaders and ascetics of any denomination. Dara took significant interest in Hindu philosophy. He got nearly 50 of the ancient Upanishads translated into Persian, the official language of the Mughal court. Dara thought that the Upanishads were a book talked about in the Qur’an, a rather unusual idea, but it shows that he was ready to bend his intellectual curiosity to his mystical needs.

Dara should not be thought of as an otherworldly mystic. He could also be a very practical man. He was headstrong on the battlefield and showed great bravery in the Battle of Samugarh. He was also a capable administrator. Gandhi surmises that Dara knew well enough that he would be the next emperor and he was actively fashioning himself as a philosopher king. He cultivated friendships with Hindu rajahs, knowing that he needed their support. Dara was happily married to Nadira Begum, his marriage costing more than half the amount needed to build the Taj Mahal. No ascetic simplicity there. Dara ordered, planned, built, wrote, and fought as any other Mughal prince would.

In the claustrophobic cauldron that India is today, where no one knows what their place is, Dara sounds almost like a would-be emperor too good to be true. Gandhi’s book records a time when India was bubbling with intellectual energy, when different religious cultures were exploring each other, not just among the princely elite, but also among the beggarly ascetics. It is that culture — never too far away in India — that one yearns for. Gandhi’s book breathes life into that ecumenical culture, and in doing so, brings the emperor who never was back to prominence, in the process reminding us of what we can do today, should we want to try.

The Emperor Who Never Was: Dara Shukoh in Mughal India 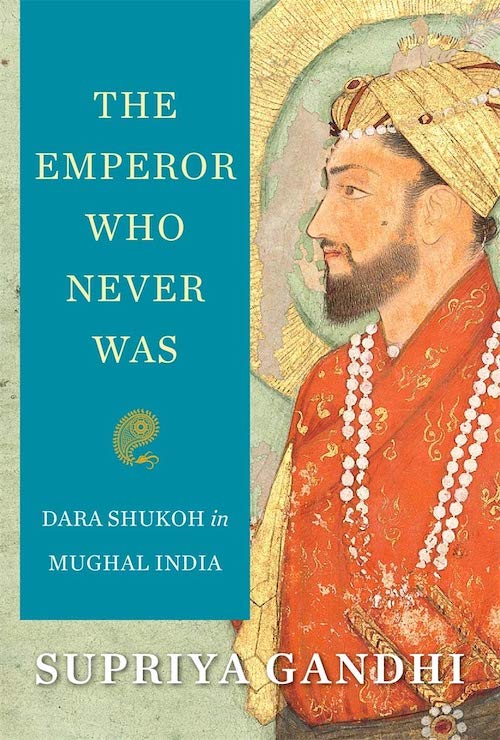