THE FIRST TIME I met LAPD detective Hieronymus “Harry” Bosch, he was investigating the decades-old murder of a 12-year-old boy left in a shallow grave in City of Bones (2002). This case haunted Harry, with memories from his own traumatic childhood coloring his perceptions. He said wonderful things, honest things: “If we can’t be honest with ourselves, how can we ever tell the truth to the people out there?” and “In every murder is the tale of a city.” He fell for a dame with a badge, and life took a left turn. A perfect, beautiful novel. I cared about Harry. I didn’t want him to hurt. My wish for a happy, healthy Harry did not come true, and we were all left with a bruised cop — and a fierce avenger for those stolen from us and from the City of Angels.

Over the course of the novels, Harry marries a poker player, retires from the LAPD, un-retires from the LAPD, becomes a dad, gains a half-brother, and falls in and out of love. And Michael Connelly has become more than Harry’s creator. Virtuoso of the Police Procedural. Wizard of the World of LAPD Fiction. Connelly is the Genius, the writer that crime writers like me look to for How To Get It Down. Like Raymond Chandler, Walter Mosley, and Joseph Wambaugh, Connelly gives us Los Angeles in all its wonderful weirdness, a city filled with Good Folk, Hustlers, Starlets, and Monsters.

In The Crossing, Harry crosses many bridges. The first bridge: he has been forced to retire from the LAPD as a result of his maverick ways. From active person to AARP member, Harry is set to spend his days restoring an ancient Harley-Davidson. Even that simple act is awash with his former life: the paper beneath the bike’s carburetor is an old story about politics and the justice system — a life Harry is no longer a part of. For now.

Harry never gets past reading the instructions before he gets the call from The Lincoln Lawyer himself, Michael McCon — I mean, Mickey Haller, Bosch’s half-brother. Haller, a defense attorney, is representing Da’Quan Foster, an ex-Rollin’ 40s Crip turned painter. Foster has been charged with the brutal rape and murder of West Hollywood City Manager Lexi Parks. Haller knows in his gut that despite his past, Foster is innocent. And he wants Harry to help him free his innocent client. Of course, Harry is reluctant to help the other side — he is a cop, damn it. But something’s not right about this case. And that poor old Harley-Davidson will just have to wait. “He [Harry] realized he had been wrong to think that restoring the old motorcycle could take the place of anything.”

As Harry sniffs around, from Echo Park and Hollywood to Leimert Park and East California (aka Las Vegas), he’s led to the possible source of the stink: pigs, and not the swine kind. Will Harry solve the crime? Will Harry realize that retirement sucks? Will Harry get the girl?

The Crossing: a damn-near perfect novel by one of the best crime writers ever. But something troubled me as I read.

As a life-long resident of the Crenshaw area, I was excited to see Leimert Park in The Crossing. Da’Quan Foster operates an art studio across from my barbecue joint and former hair salon. I wish we could’ve lingered there longer. Maybe talk about the new subway system or the new restaurants, the changing face of that part of town. Maybe next time. And maybe next time, we’ll delve a little deeper into race and the police. Connelly briefly mentions these dynamics as he talks with his former partner Lucia Soto about a criminal informant involved in Foster’s case: “These fourteen months go back way before Baltimore, way before Ferguson.”

Fortunately for Harry, he doesn’t have to delve deep into “hands up, don’t shoot” or the shameful history of wrongful convictions for black and brown folks — even though the LAPD has made its storied abuse of power and mistreatments of African-Americans, especially during the reign of William H. Parker, the city’s Chief of Police throughout the 1950s, an art form. Yes, discussion of racism, policing, crime, and class are ewww and icky. Murky, sometimes. And really, no one likes talking about it, even writers who dare to call the world a liar to its face. But Da’Quan Foster, the defendant in The Crossing, may be convicted for a crime he may not have committed because of all that icky murky race crap no one likes to talk about. Instead, as he did in Angel’s Flight (1999), Harry focuses on finding the monsters who really killed Lexi Parks.

But this — avoiding race and policing — didn’t trouble me … much.

Throughout his investigation, Bosch continues in his attempts to bond with his teenaged daughter, Maddie. Like many teen girls, sullen Maddie eye-rolls a lot and gives one-word answers to Harry’s three-word questions. Still, she’s complex: she joined her school’s Police Explorer program and wants to become a forensic psychologist. He is very protective of Maddie although he barely talks to her, although she may be developing an eating disorder, although he’s the only parent she has.

In one scene, Harry and Soto discuss the Parks murder as Harry sneaks peeks of the murder book. The subject of women’s fragility and men’s work and Maddie’s future in law enforcement comes up. And Harry says, “Yeah, well, maybe I’m old-fashioned. I kind of hate the idea of women seeing the evil men do. Something like that.”

Aha! That’s it! That’s what troubled me.

Harry. Dude. Women and girls have seen the evils of men since Eve’s first-born son Cain killed her second-born Abel over fruit and sheep. According to FBI statistics, 11,766 American women were murdered by current or ex male partners between 2001 and 2012. Every nine seconds, a woman is assaulted or beaten in American (Domestic Violence Statistics). Huffington Post writes that up to 10 million children witness some form of domestic violence annually, and nearly one in five teenage girls who have been in a relationship said a boyfriend threatened violence or self-harm if presented with a breakup.

I tell my own daughter to look up, be aware, don’t get in cars with strangers, wear shorts under skirts, listen to her gut, and don’t get in the elevator if a guy gives you the heebie-jeebies. All because of the prevalent threat of the evil men do. Women can teach a class in the dairy aisle at Ralphs in the dark on the evils that men do. US Congresswoman Gwen Moore correctly opined, “Violence against women is as American as apple pie.”

So while this is a sweet, old-fashioned remark about protecting the ladies, it’s also a bit … da hell? I’m almost certain that Maddie Bosch has seen the evils of men; her mother Eleanor was murdered in Nine Dragons. If she is an American teenager, I’m sure one of her friends or a friend’s cousin’s sister has been knocked around or threatened by a male. Someone’s mom is being slapped by a dad, a father or a babydaddy. As author and businesswoman Leslie Morgan Steiner says, “Domestic abuse happens only in intimate, interdependent, long-term relationships — in other words, in families — the last place we would want or expect to find violence.” Maddie’s seen it, heard it, read about it on Facebook.

And Lexi Parks, the victim in The Crossing, witnessed the evils of man — she just didn’t live long enough to tell us about it. Not that I really got to know Lexi. There were no physical descriptions of her, no touching anecdotes from friends, or meaningful interactions with the angry husband about the wonderful woman. She is more of an idea, a hollow tent pole, a MacGuffin to force Harry to become the reluctant private investigator.

Still! I’m looking forward to reading about Harry’s life as that reluctant P.I. Maybe he’ll cut off Maddie’s phone, talk to her, then find her a shrink. Maybe he’ll throw a trashcan in a plate glass window on behalf of the wrongly convicted people in jail — in jail because of bad cops and bad judges. Maybe he’ll dive deep, deep, and deeper, and then, use his maverick ways to force change in the City of Angels. All this? Quite the bridge to cross. But this is Harry Bosch — he can do anything. 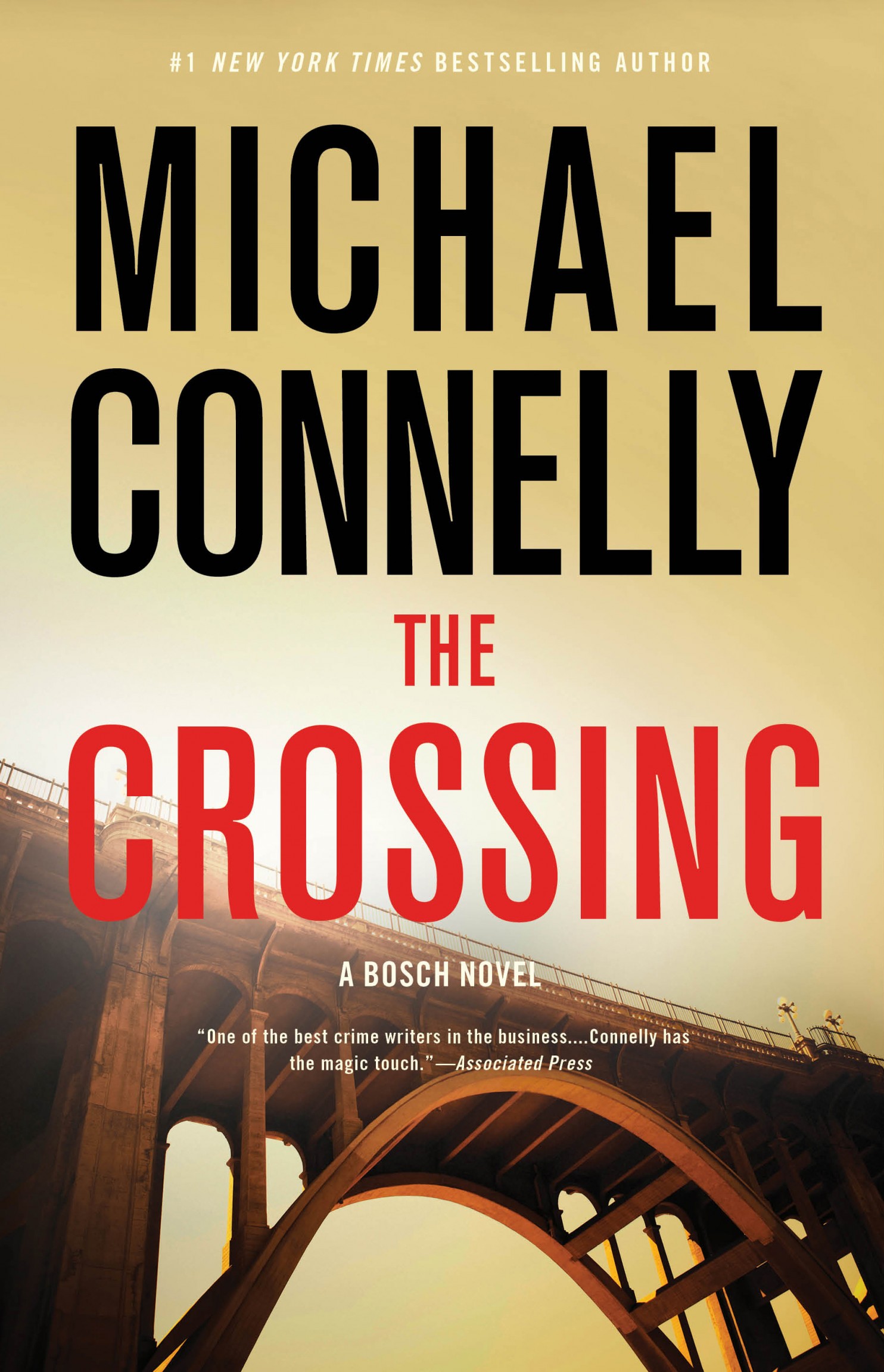