AMERICAN HISTORY IS STAINED by recurring periods when our founding ideals — of an open society that upholds the free marketplace of ideas and diverse political viewpoints — have been sacrificed to fear and hysteria: reactions to threats, foreign and domestic, real and imagined. During these dark chapters, cherished democratic institutions such as the Supreme Court, Congress, and state legislatures, as well as the press and civic organizations, instead of standing up for the rights and liberties enshrined in the Constitution, often proved weak and spineless, encouraging and at times even leading many of the worst violations.

One of these tragic periods reached its heights during the 1940s and 1950s, popularly known as McCarthyism, when fear of communism prompted excessive public and private efforts to  punish unorthodox ideas and advocacy. In Priests of Our Democracy: The Supreme Court, Academic Freedom, and the Anti-Communist Purge, Marjorie Heins juxtaposes her compelling and distressing account of the anticommunist purges that reached into the ivory towers of our colleges and universities with a chilling cautionary tale that asks whether history is repeating itself through the repressive reactions to 9/11. Have the earlier witch hunts that targeted alleged communists (with a disturbing and disproportionate focus on Jews) been replaced with an obsessive targeting of alleged terrorists (with a disturbing and disproportionate focus on Muslims)? Have we learned anything from the excesses of McCarthyism, or are we condemned to repeat them?

Heins, the founding director of the Free Expression Policy Project, engagingly addresses these and other urgent questions by deftly telling the stories of professors and teachers victimized by academic purges, while she deftly navigates more than 50 years of legal battles and constitutional controversies.

In 1951, George Kennan, a keen observer of the Cold War, warned — in words as relevant today as then — that the blinding fear of communism posed a danger that Americans would become

rather like the representatives of that very power we are trying to combat: intolerant, secretive, suspicious, cruel, and terrified of internal dissension because we have lost our own belief in ourselves and in the power of our ideals.

Heins places her account within the context of anticommunist hysteria at the national level, including President Harry Truman’s 1947 executive order that created a program of sweeping loyalty investigations (of employees in every federal agency), the attorney general’s list of “subversive organizations,” and, at the state level, the infamous Rapp-Coudert investigations in New York, in which more than 500 professors, teachers, staff members, and students were interrogated, over 80 of whom were fired, resigned, or did not have their contracts renewed.

The heart of the book is Hein’s comprehensive and accessible analysis of the fate of academic freedom from the Supreme Court’s 1952 decision in Adler v. Board of Education to its 1967 decision in Keyishian v. Board of Regents. Both cases dealt with New York’s Feinberg Law, which created a complex system of procedures to investigate the “loyalty” of every public school teacher and which authorized the removal of anyone who engaged in “treasonable or seditious acts or utterances” or who joined an organization that advocated the overthrow of the government by “force, violence, or any unlawful means.”

In Adler, the Court found no First Amendment problem with the Feinberg Law, since teachers had no “right” to their jobs and were working “in a sensitive area” where they shaped young minds. The 6–3 majority opinion was written by Justice Sherman Minton, whom Heins calls “the most anti-civil-liberties of the justices.” According to Minton, while the First Amendment assured everyone the right to “assemble, speak, think and believe as they will,” when it came to “a sensitive area in a schoolroom,” “[o]ne’s associates, past and present, as well as one’s conduct, may properly be considered in determining fitness and loyalty.”

Justice William O. Douglas wrote a fiery dissent saying the Feinberg Law “proceeds on a principle repugnant to our society — guilt by association” that “turns the school system into a spying project” and would “raise havoc with academic freedom.” According to Heins, with that, Douglas introduced the term “academic freedom” into the Supreme Court’s lexicon. Douglas warned that with this decision, “a pall is cast over the classroom.” He urged that “the guilt of the teacher should turn on overt acts. So long as she is a law-abiding citizen, so long as her performance within the public school system meets professional standards, her private life, her political philosophy, her social creed should not be the cause for reprisals against her.”

Douglas was not alone. In his separate dissent, Justice Hugo Black warned that the Feinberg Law:

is another of those rapidly multiplying legislative enactments which make it dangerous — this time for schoolteachers — to think or say anything except what a transient majority happen to approve at the moment.

Within less than a year, the dissents in Adler began to influence the direction of the court. In Wieman v. Updegraff (1952), the court unanimously struck down an Oklahoma loyalty program that included a test oath for public employees, including state college faculty. In a memorable concurring opinion, Justice Felix Frankfurter wrote:

To regard teachers — in our entire educational system, from the primary grades to the university — as the priests of our democracy is not to indulge in hyperbole. It is the special task of teachers to foster those habits of open-mindedness and critical inquiry which alone make for responsible citizens.

By 1967, not only had McCarthyism been exposed and discredited as the country began to come to its senses, but the Supreme Court lineup had also changed dramatically. Only one of the justices in the majority in Adler, Tom Clark, was still on the court. New justices Earl Warren, William Brennan, and Abe Fortas joined Douglas and Black to overturn Adler and replace it with the groundbreaking decision in Keyishian.

In Keyishian, Brennan essentially transformed Douglas’s dissent in Adler into the majority opinion of the court. As Heins puts it, Brennan “rejected wholesale the idea that restrictions on expression, ideas, and political associations are permissible under the First Amendment as conditions of public employment.“ Reversing Adler and striking down the Feinberg Law, Brennan wrote:

Our Nation is deeply committed to safeguarding academic freedom, which is of transcendent value to all of us and not merely to the teachers concerned. That freedom is therefore a special concern of the First Amendment, which does not tolerate laws that cast a pall of orthodoxy over the classroom.

But the promise of Keyishian and its progeny, and the robust First Amendment protections for which they stood, fell victim to a post-9/11 willingness to sacrifice civil liberties in the name of fighting terrorism. In 2010, President George W. Bush’s appointment as chief justice, John Roberts, wrote the majority opinion in Holder v. Humanitarian Law Project, upholding the federal law that made it a crime to provide “material support” to any “foreign terrorist organization” to cover peaceful, lawful, and constitutionally protected activity, such as training radical groups to pursue nonviolent means of conflict resolution, or lawyers’ filing friend-of-the-court briefs in support of such groups.

Justice Stephen Breyer, joined by Justices Ruth Bader Ginsburg and Sonia Sotomayor, wrote a trenchant dissent that argued that the First Amendment does not permit the government to prosecute people for teaching and advocacy with lawful aims, even if it is coordinated with a group branded as “terrorist.” David Cole, a Georgetown law professor and the counsel for the Humanitarian Law Project, pointed out that had this interpretation of the material support law been on the books in the 1980s, the thousands of Americans who donated to Nelson Mandela’s African National Congress would have been criminals.

Heins is deeply concerned about the future of academic freedom, in particular, and the First Amendment in general. She writes that the “American political system is all too vulnerable to political repression and to demonizing the dissenter, both on campus and off.” Her important and compelling book makes a powerful case for renewing our fundamental commitment to the principle Justice Oliver Wendell Holmes Jr. articulated almost 85 years ago: that freedom of speech does not protect “free thought for those who agree with us, but freedom for the thought that we hate.”

As Heins puts it, the cost of repressing “bad” ideas is too high:

[T]he people in power will inevitably try to squelch the ideas they think dangerous to their hegemony; yet these may be the very ideas needed for progress and social justice. Academic freedom is a “special concern of the First Amendment” because genuine education is not only liberating in itself; it is the basis of a successful democracy.

Priests of Our Democracy

The Supreme Court, Academic Freedom, and the Anti-Communist Purge 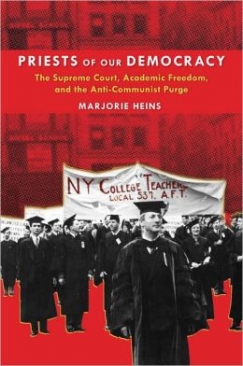